Akriti Singh named her four-year-old theatre group Storia Senza Storia, which means story-less stories. “There is a writer called Scarlett Thomas, who is my favourite. There is a book by her called Our Tragic Universe, in which she talks about storyless stories, to write a novel, that should read like life, not like a plot. From there I got the name of my group, that is, story which is not a story, so a story that is truth.”

An architect by training, a poet and playwright by inclination, the Rourkee-born Akriti came to Mumbai to work with a design company,  “But I was very clear in my head that moving to Mumbai would mean that I got into this field; I wanted to act. On weekends I used to go to an acting class, attend some workshops, then I started auditioning and got a TV show, Mere Apne (costarring Vinod Khanna and Smriti Irani). So I left the job, did television for a while, made money, but then I realised it was not something I wanted to pursue. I killed a lot of my brain cells to work there. Then theatre happened, and here I am, enjoying my work.” 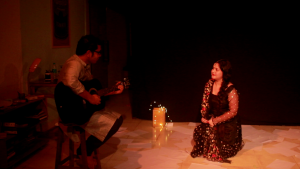 She says it was as simple as approaching theatre people and asking if she could act in their plays, “I worked as an actor with different theatre groups, with Manav Kaul, Salim Arif, Imran Rasheed, Akarsh Khurana. When I was working in other groups, I was not just acting, I was doing a lot of other work–handling backstage, doing the finances, designing costumes, making posters. That helped; I think if you get to go on stage easily, without doing backstage, there is no respect. If you have really done a lot of work backstage and then you step on stage, then people go wow!  I learnt a lot from Manav, his way of directing, his discipline and approach to theatre. I learnt from the others too, but Manav is the biggest influence.”

The first play she did on her own, was Shah Ki Kanjari, a solo, based on an Amrita Pritam story. “I didn’t need a director for that, it was just me acting on stage,  but while preparing it, I had to think of the direction aspect also. That was the first time I understood that i could make things for stage, I know how to tell a story. I write a lot of poetry on my blog. Slowly I decided to write plays and see how it goes.”

In the four years since started her group, she has done about a dozen plays, and written or co-written all but two—Shah Ki Kanjari and The Little Prince (based on the Antoine de Saint-Exupery classic)– produced, directed and acted in all. Breadcrumbs—a spin on popular children’s fairy tales– was her first play with the group.

“In the initial plays, there were fewer actors now it’s a bigger group. When people come to me and say they want to do theatre, I have to be accepting towards them, because I remember how I was accepted by theatre people. Either I get them into my group or tell them how to go about it.”

Her ideas as a playwright could come from anywhere; her latest play for children,Monsters and Dragons was written and produced because, “I spoke to a few children and asked them what they would like to watch in a play, and they said they would like to watch a fight between monsters and dragons. So it started from there. I wanted to talk about how to use your brain, and how it can be magical.  So the play is interspersed with a lot of quizzes. The actual fight is the fight of logic and I tell the children through those quizzes that magic is actually in your head, in the way you think about the world; and if you think differently, then that is magical. Monsters are also in your head, but if you use logic, you can defeat them.”

“Boing Boing was a tribute to a French play, which I didn’t actually read, I just saw the synopsis. When I was in Paris, I heard about this Boulevard Theatre that does comedy plays with similar stories, man, woman and other.  I read up a few synopses of such plays, one of them was Boeing Boeing,  My play called Boing Boing is not the same, just my tribute to the Boulevard kind of theatre.”

Her preoccupation with language has driven some of her very unusual plays. “Actually I was writing a lot in English, when I made Bol, I asked myself why am I not writing in my own language? So I write in Hindi and even try dialects. Bol happened because I was thinking about our dialects that are dying, since we don’t speak them anymore. Nachari and Ghalib came out of the research I had done for Bol. I got to know of a Maithili poet Vidyapati, the myths and folk tales around him, that led to Nachari. I found it fascinating that a god came and lived as a servant for a poet. I read a lot of Urdu poetry, so I wrote a play about a fictional character Ghalib wrote about. For me it is a continuation of the same thought about language. When young people come to watch these plays, they are moved.. they want to talk about them.  It is a matter of making them realise that they should be interested in our own history and language.

“I want to do something about the female Urdu poet Parveen Shakir, who died young at thirty-nine in a car accident, but led a fascinating life. The singer Rabbi Shergill inspires me a lot. He talks about why he sings in Punjani and not in Hindi or Urdu, and here we don’t speak in our mother tongue for fear that that people will think we are ganwaar (illiterate).”

Her training as an architect has not yet found an opportunity for expression in her theatre. “My plays have not had a lot of sets because of budget constraints, and I have found that the content matters more than the sets. And music, preferably live; when I was doing Shah Ki Kanjari, the story happens in a wedding, so there are three-four wedding songs written in the story. I decided let’s sing these songs, create the mood, with dholaks and all. I met singers and composers via friends and so my productions were enhanced with original songs.”

As an outsider to Mumbai, Akriti has observed and been a part of a subculture of creative people, who comes from various places and tend to live and work in the vicinity of the suburb of Versova (in north Mumbai). “Far from being competitive, the people are really helpful, especially in theatre. If I ever need something—say, a prop for a production– I just have to ask, and I manage to get it.”

In space-crunched Mumbai, the biggest problem for a small theatre group, she says, is “Storage for sets and the lack of rehearsal spaces. They charge so much it becomes difficult to rehearse for a long time, which becomes a factor in the plays I do– what can be done in shorter rehearsal time in a smaller space.  We can’t pay our rent through theatre, we have to do ads or web series. I did so many plays in four years; what helps are these small alternative theatre spaces.  Because at the regular venues, either dates are not available or the rentals are too high. But, if you are innovative and keep making stuff, you manage. Like, I did a project called True Ghost Stories, where I just narrated ghost stories from the experiences of friends and acquaintances. That went very well.”

She is currently at work on a play about Sultana Daku, a Robin Hood like outlaw from north India, who has become a part of legend, folklore and nautankis. “I have been thinking about it for a year, and serendipitously a friend gave me a book on him. This is a subject and form I want to explore.”

(This piece first appeared in The Hindu Friday Review on June 21, 2019)