Thirty-two years ago,  Chandrakant Kulkarni  had moved to Mumbai from Aurangabad, with the dream of a career in theatre; the name of his group back home was Jigisha, which means desire to win.  It is apt for a man who has excelled in theatre and films, with a bit of TV thrown in. Age seems to have given him a miss, he still has the idealism and optimism of a teenager, his eyes still sparkle when he talks of plays—his own and those of others.

Kulkarni’s stage work includes hits across genres, like Char Chaughi, Chahul, Doctor Tumhi Suddha, Dhayanimani, Gandhi Viruddh Gandhi, and Mahesh Elkunchwar’s Wada Trilogy, which he did as three separate productions, as well as a nine-hour marathon. He revived it two years ago (after nearly two decades) and it has been running successfully.  “People are always saying audiences are dwindling, but if we do purposeful, meaningful theatre, they come. The Trilogy is attracting new audiences.”

Another recent play, Sakhar Khallela Manus (The Man Who Ate Sugar), a comedy about a man diagnosed with diabetes,  starring Prashant Damle, is a huge hit and has been travelling extensively in India and abroad wherever there is a Marathi-speaking population, including a show in Japan.

“Audience relate to it,” says Kulkarni. “our lifestyles have changed, and we know the problems that come along, but we don’t want to do anything about it. That was the small message in the play, and with the energy of Prashant Damle, it worked. On the one hand, I have done content-heavy experimental plays, like Ashadh Bar (about Sudraka, Kalidasa, Mohan Rakesh and a contemporary playwright meeting in a bar) and  then, there is something which is just fun.”

About why Marathi plays are increasingly travelling abroad, he says, “For people who migrated in the Sixties, there is a kind of nostalgia attached to the language of their roots.  But later, many young IT professionals from small towns in Maharashtra, have settled abroad and for them, watching a Marathi play is a way of gathering together and feeling connected.”

The past few months have been hectic for Kulkarni, he directed a mammoth production of Hamlet in Marathi, with stars like Tushar Dalvi, Sumeet Raghavan and Mugdha Godbole, and audiences are flocking to it.  “I see big productions taking place in Mumbai, and also screenings of plays from London with all that grandeur. It is possible to do such productions in Marathi, provided there is proper management, the right casting and extensive rehearsals. It is difficult to get actors to commit, but we work around it—from Monday to Thursday they shoot for their films or serials, over the weekend they act in plays. In the old days there were actors like Dr Lagoo who were committed to theatre, but even today, there are stars who give priority to theatre.  TV fame is temporary, it is the character that people remember, not the actor. So young actors go to TV and web series and return to theatre. 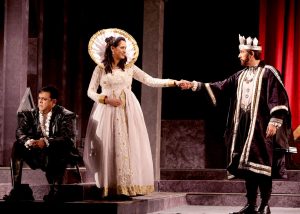 “As a director, I am always looking for challenges and to create something on this scale, with grand sets, costumes, lights, music and a team of 127, is exciting. We have not ‘Marathified’ the play by adapting it to Maharashtra; the names, places, references are all from the original, only the language is Marathi. The beauty of a Shakespeare classic is that the context is still relevant—it is about family, loyalty, love, honesty.  The only problem with a play of this scale is a lack of adequate venues, so the shows are fewer in number. And, of course, touring is very difficult.”

Kulkarni’s film work has been very successful too, with his eleven odd films in a variety of genres  winning awards and acclaim, but he keeps returning with even more enthusiasm to theatre. “It is elementary—theatre is about today, here, now.  It can be about the lives, day-to-day struggles and heartbeats of people. The kind of subjects that can be taken up by theatre and discussed, cannot be done in any mother medium.  Theatre can be socially connected and relevant. There are no taboos in terms of subject or expression.”

He is not unaware of the problems being faced by Marathi theatre. “Audiences are fragmented, by genre and location. There are seasonal hassles too! In the old days, show timings in theatres were adjusted according to shifts in mills. That does not work any longer. People find it tough to travel long distances to watch plays after a day at work. Work schedules and routines have changed. Now people have some time to watch plays only on weekends, and then too, there is the attraction of films, short vacations at resorts or second homes.

“There is hardly any space for experimental theatre. At one time, such great experiments were done at Chhabildas (a school hall in central Mumbai). A collective effort is needed to create new addas (hangouts), where people can come, watch discuss. It seems to me that this kind of activity has shifted from Mumbai to Pune, where young groups and directors are doing wonderful work.”

On the plus side, he feels there is still in Maharashtrian homes, “a culture of reading, music and going to the theatre. I see three generations of a family coming together to see a play.  If technology like TV and the internet has taken away a chunk of audiences, it is technology again like online booking that has brought audiences back. Children book online for their parents and grandparents, so that takes away the hassle of getting tickets. But even now, more than social media, it is word of mouth that brings audiences to plays.  Theatre is still a medium which you have to choose to go to, and for two hours, you have to switch off your phones and concentrate. It is like therapy in these times of frantic multitasking, and still a rare collective activity.”

The creative opportunities offered by Marathi theatre is also perhaps why the maximum original plays are written in this language. “There is sporadic criticism that after Tendulkar, Alekar, Elkunchwarthere have been no great playwrights. I do not agree—we have had strong writers of the caliber of  Premanand Gajvi, Shafaat Khan, Jayant Pawar, Prashant Dalvi, Ajit Dalvi, Abhiram Bhadkamkar, Makarand Sathe to name just a few, and the directors have kept up too—Waman Kendre, Vijay Kenkre, Prashant Buddhisagar, Mangesh Kadam, Kedar Shinde, Mohit Takalkar, Nipun Dharmadhikari, Prajakt Deshmukh, and myself—again I am rushing through names.  The experience of theatre for the practitioner and the audience is like a chaska (addiction). Theatre keeps me occupied;  I am constantly working on a play, reading, rehearsing, watching, talking, attending festivals. My age may have gone up but my energy level is the same. When you do what you love, it does not feel like killing time.”

(This is a slightly modified version of the interview that appeared in The Hindu on August 10, 2018)