As a tribute to Nimmi who passed away on March 25, a look at one of her last films– a rare comedy in a career packed with tragic parts:

Daal Me Kala (1964) had some fine talents associated with it—the story was by  famous Bengali writer Premendra Mitra, the director was Satyen Bose (whose best known film is the iconic comedy Chalti Ka Naam Gaadi—1958), and it a high-powered cast lead by top-billed Nimmi with Kishore Kumar, Agha, Shammi and Abhi Bhattacharya, plus a line-up of comedians like Om Prakash, Maruti, Sunder and Keshto Mukherjee.

It is a typical comedy of errors—Raju (Kishore Kumar) and his best buddy Rajaram (Agha) have travelled to Bangalore for job interviews. They don’t get hired and have no money for the return ticket, so get into the train, and try to evade the ticket checker.

Meanwhile, Rai Bahadur Bishambharnath (Bepin Gupta, also the producer of the film) is awaiting the arrival of Professor Roy for a lecture at a local college, and also hoping to make a match for his daughter Manju (Nimmi). She is the typical Miss Neeta (a term coined by Shabana Azmi for vapid Bollywood leading ladies), who plays basketball and directs plays in her living room, waiting for the inevitable arranged marriage.

From the seedier part of town, theatre manager, Banke Bihari (Om Prakash) is waiting at the station for singer Natwar Shyam to star in his latest musical, opposite prima donna Munnibai (Kammo).

Raju and Raja clamber aboard an empty first class compartment and cause all the rumpus that follows. When they alight, Rai Bahadur mistakes Raju for Professor Roy, whom he has never seen; and while Natwar Shyam (Sajjan) passes out drunk in his compartment and fails to disembark, Banke Bihari picks up Professor Roy (Abhi Bhattacharya), mistaking him to be the singer.

Raja is so thrilled by the welcome, that he persuades a reluctant Raju to go along with the charade; while the bewildered professor and his idiot manservant Bhola (Sunder) are practically imprisoned in the shabby theatre greenroom. All his protests are believed to be artistic nakhras.

When there is chance to get away, they are stuck, because Raju has fallen in love with Manju, while Raja is captured by her  giggly cousin, Sheela (Shammi). 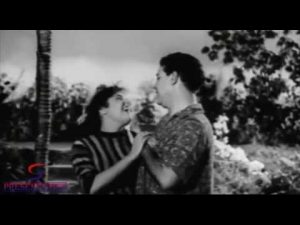 The professor escapes with great difficulty on the day of the show, and that leads to the unmasking of the imposters in Rai Bahadur’s home.  For some reason, he does not press charges, and the two return to their Mumbai hovel, where their ferocious landlady (Tuntun, speaking atrocious Marathi) demands pending  rent.

A distraught Manju agrees to her father’s plan to get her married to Professor Roy, but her heart is clearly not in it.  Roy senses it, and his suspicions are confirmed by Sheela, who reveals that Manju is still in love with Raju. So, the good professor hatches a plot to unite the lovebirds.  This involves a business plan, a job offer and disguises—ending with an uproarious chase in which Manju pursues Raju all over the streets, and the entire cast (minus the theatre company left behind), ends up in a swimming pool.  (Note that directors were using this all-fall-down device much before Priyadarshan and Anees Bazmee).

The bulk of the tomfoolery is shouldered by Kishore Kumar and Agha, and they are effortlessly funny. Abhi Bhattacharya brilliantly does outraged dignity (when Munnibai serenades him) and charm. But this must be one of the few films in which the sad-eyed Nimmi laughs a lot and that chase in the end is hilarious. It’s a pity she chose to retire after one more film, Akashdeep, a year later and vanished from the scene.

Daal Me Kala, with some pleasant –though not memorable—songs composed by C. Ramchandra, was sweet, innocent fun and works surprisingly well  with its dated plot – today a Google search would throw up images, and that buried this genre of mistaken identity comedy forever. But it was enjoyable while it lasted.