As Divya Jagdale gets set to perform her one-woman play, revisiting an interview with her:

When Divya Jagdale moved to Mumbai, it was with a secret dream to become an actress, which she did not have the courage to share with her parents. Her father’s transferable job meant that she was not exposed to theatre in any of the towns where they lived.

So, her theatre education in Mumbai consisted of watching a lot of plays, and then acting with directors like Satyadev Dubey, Sunil Shanbag and Makrand Deshpande. Inevitably she coasted towards writing, directing and producing plays, besides acting in a few films.

“I felt there were two people within me, and acting gives me the space to look at myself as a subject. Theatre became my cocoon, I understood that I got freedom only in theatre. I have always been a drifter I the sense that I never had any fixed career plans. Whatever is happening should make sense to me at that point of time, and also offer nourishment to the soul.”

When she wrote her first play, Bansuri, it was after Shanbag gave her a “crash course” in playwriting, and went on to direct it himself. She wrote others like End Of Season, Between The Lines, Two Of  A Kind, and ended up having a working partnership with her husband, actor-director-writer Shiv Subrahmanyam; strangely they never acted together, but she directed the plays he wrote. “I am glad I got to play around with Shiv’s writing, a liberty I am not sure I can take with other writers. But then this is the only time Shiv listens to me or lets me take those liberties in interpretations. Most other times I have communication issues with him, like all ordinary marriages. Maybe this is a way of making our marriage work–he writes and I direct. But seriously, his writings, be it Coffee In The Canteen, The Way I See It or Toxic have empowered me as a director.” 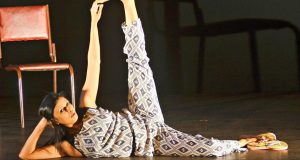 The Way I See It

She thinks that, as a director, Shiv is very good with actors. “He is gentle, always making suggestions and you can handle that.  He has spoilt me, because I cannot take a dictatorial sensibility. So when I am directing, I treat actors very gently too. I am constantly feeding them, making tea, always trying to see things from their perspective.  I treat them as I would like to be treated as an actor.”

Later, she sends a mail explaining further, “Process is everything. But it reveals itself. I could say that I like to read the text a lot, till it starts talking to you and taking form inside you;  or I could say I like to rehearse a lot with the actors, hear them read, stumble on emotions, gestures, lines or anything else which they pick up. I get excited about that and then I do have my own suggestions that I bring in at some point. I enjoy watching this particular time in the process. This is when you see your own ideas taking shape as a director. If a particular thought works, it is really satisfying and if it doesn’t I like to move on and come back to it later or never but at no point do I take myself seriously or anyone else seriously.

“The structure and form emerges any way if there has been enough education in your craft and you have commitment towards it and you have the mental stamina to stay engaged without anxiety. The process has to be light only then will it bubble from within and surprises will pop up. Actors, of course, are the main ingredient that will bring the dish to life. Being an actor yourself, you have that advantage; you know your main ingredient well. You cannot stuff them in boxes. You need them to breathe easy in big bartans (vessels). Yes, I like to cook and this too is part of my process. I also discovered along the way that every actor needs to be spoken to differently and every piece of work reveals to its maker a different process that is magical and surreal sometimes.”

Divya’s recent plays have been designed for the small alternative spaces opening up in Mumbai, aiming for a minimalism that she finds important to explore. “It is the need of the hour. If everybody just took what was absolutely necessary, the world would be a much better place.”

She is also working on a project that could turn out to be something exciting and seminal—through conversations with actors, building a narrative of acting. “What kind of character is close to them, how do they study acting, are they connected to literature? Do they even think it is necessary for an actor to know literatre? Why did the act? It is just work or a means to build their personality?  I want to weave these stories into a narrative, their journeys, their search, how they make themselves comfortable in the space they inhabit.”

After doing several English plays, she now wants to return to her Hindi roots. “I was born in Jaipur and my dad who is from Indore spoke in pure Hindi with us at home even though I went to a convent school and Mom, who is a Kashmiri Pandit, spoke good Hindustani at home with a lot of Urdu thrown in. English happened because I got married to an English-speaking Tamilian. It has taken me fifteen years to understand where my own cultural roots are, something that I took for granted for a long time, because I am always searching and sometimes escaping from my own reality. But now I feel more grounded reading the works of Hindi writers. The other day Shiv and I were speaking to our actor friend Vineet Kumar, who told us about his writer friend Hrishikesh Sulabh. He narrated a few of his short stories to us. I simply lighted up. I have discovered the writings of Hrishikesh Sulabh, and I am enjoying reading his short stories and plays. I am on to something but I don’t know right now what exactly. I could do performed readings of his work or pick up a few monologues from his work and do a play or write a screenplay if he allows me to. I am willing to take that chance. I am excited and eager and looking forward to another process of creating some good, entertaining work.

“Now I find directing more empowering than acting,” she continues, “I feel I am speaking up for myself. As an actor, you are always listening, understanding and telling yourself to understand more and more. That’s aspiration actor, right? The more he/she  understands, the more challenges she gives to her potential to understand  people, situations and life’s circumstances of others, more the craft will get honed and the performance will shine. This kind of drains you mentally. There was a part of me that was so oppressed by my own psychology that I limited myself. It is only when I discovered direction that I truly started speaking my mind. The actor in me started breathing simply because of my directorial voice. And looking at me you can never tell I am caving under the weight of my own understanding. Since I started directing, I know when to stop oppressing myself, use the craft, rely on emotion as a tool and somehow stay present in the reality of tonight’s show and stay open to opinion which should not be destructive. Feedback of audience or your contemporaries, if it doesn’t tell you what you can do next, is useless. I want to be able to go back home, cook and bake, chat with my son and his friends, throw parties, do stand-ups, perform skits at friends’ parties, organise readings and discover life at every opportunity– that’s my aim.”