The term ‘male gaze’ was coined by Laura Mulvey in her 1975 essay, Visual Pleasure and Narrative Cinema—which, to put it simply, meant that visual media are created for a heterosexual male’s point of view and that women are sexualized to please the male viewer.

This came to mind when watching two new web series in which women use their bodies to entice men for a motive—in She (directed by Arif Ali and Avinash Das), the woman is on the side of the law, in Ek Thi Begum (directed by Sachin Darekar), a slain gangster’s wife plots an improbable revenge. Both series aim to put forward the idea that a female’s power is in her body, made available for sex; ironically, real power remains with men, who are able to access this body for their pleasure. In both, the camera almost lasciviously captures the bodies of the young protagonists—and, interestingly, in both they are pretending to be commodities for sale.

In She, created and co-written by Imtiaz Ali (whose films stay away from sleaze), a police constable, Bhumika Pardeshi (played by Aaditi Pohankar), is ordered by her superiors to go undercover as a prostitute, to trap a drug dealer, Sasya (Vijay Varma).

The series goes into some detail about Bhumi’s past and present circumstances. She is surprisingly passive, even when her male colleagues describe her as almost male, meaning with no sex appeal. She is in the process of an acrimonious divorce with her husband, who accuses her of frigidity.  Bhumi left her own flat to move in with her ailing mother and sister, and is the sole breadwinner. The sister, Rupa, is portrayed as selfish and flighty—the kind who prances around the chawl in skimpy clothes and flaunts public displays of affection with her creepy boyfriend, whom she strings along for his money. Later, when talking about her sister, Bhumi is both angry and amused at Rupa’s sexual competitiveness, the constant urge to attract men just to prove how superior she is to her lanky and mannish-in-khaki sister.

Nobody is more surprised than Bhumi when she is picked by the narcotics department head (Vishwas Kini) of the crime branch to be the bait for their prey, Sasya, who is known to frequents brothels. Bhumi, whose ordinary looks and lack of femininity are callously commented on, is put into tiny, glittery costumes and high heels, and slathered with make-up to bring out her latent sexiness. She is astonished at her own transformation, and is seen admiring her own figure in a few scenes.  The male cop who taunted her the most, looks suitably dazzled.

Later, this very innocence, entices Sasya’s boss Nayak (Kishore Kumar G) to deviate from his practice of never picking up the same hooker twice, as he is captivated by her lack of affectation (she speaks with a cute Marathi accent). The series may have aimed at the sexual awakening of a repressed young woman, but there is no indication that the unearthing of her missing self-worth is in any way empowering. She is still a sexual slave—whether for her exploitative crime branch bosses (when she refuses to continue the charade, they sack her unceremoniously, or for Nayak, who literally chains her like a pet dog. If Season 2 is any different, and whether she will use her brains to get out of the murky hell she is pushed into, remains to be seen. When Season 1 ends, she is admiring her own bare (well, she has her lingerie on) form in the mirror and making Nayak an offer he cannot refuse. 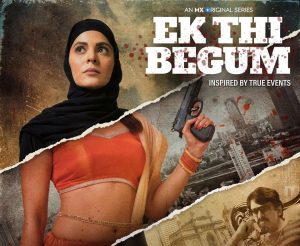 In Ek Thi Begum, the veiled and virtuous Ashraf (Anuja Sathe) is compelled to use her body when her gangster husband is killed by rivals and she wants revenge, because she does not get justice in court. The irony of a criminal’s wife expecting fairness from the system is lost on the makers—in a just world, her husband would be in prison.

So Ashraf throws off her hijab, puts on make-up and provocative outfits to become a bar dancer, named Sapna. She is sure that she can attract all the men responsible for the murder of her husband, and somehow, by sexual manipulation (without actually prostituting herself), she either kills or gets them killed– by other gangsters, or by an eager cop (who falls in love with her).

Her fatal attraction is that she is not crudely seductive like the other bar dancers—the men are turned on by her nazakat  and sly charm; she also uses  the ploy of making the men feel protective towards a helpless woman. By the time Season 1 ends, the only one left for her to scalp is the top Don, Maqsood, who lives in Dubai (obviously modelled after Dawood Ibrahim).

The series is a highly embellished version of a true story, and far from portraying a woman as smart and courageous, it actually confirms the male belief that women are untrustworthy, just out to tempt and deceive men.  It is incredible how every single man she sets her sights on, is bewitched by her. As she says at some point,  more men are felled by a dropped pallu than by guns (or something to that effect).

Neither She nor Ek Thi Begum want to look at the idea of what a woman desires—the female gaze, so to say. She is either reluctant honey trap or wily temptress, both existing for the pleasure of men, who want women to be human sedatives (Sasya uses the word relax) or dumb dolls, with no demands of respect or commitment. Forget empowerment, this could not even be any thinking woman’s idea of fulfillment.

The Sun Down Motel – Book Review