Who could have imagined that a photo of Judy Garland and Maud Gage Baum sitting together on a film set, would trigger this wonderful book, Finding Dorothy, by Elizabeth Letts.

Maud was the wife of L. Frank Baum, who wrote the all-time favourite children’s book The Wonderful Wizard Of Oz (and other Oz books), on which was based the classic movie, The Wizard Of Oz, starring Judy Garland as Dorothy, the spirited heroine of the story, one of the few positive female characters in the pre-feminist era.

If described in a line, Finding Dorothy is about the making of that glorious film, which created visual magic before computers made it all so easy. Juxtaposed with vignettes of the shooting, is the love story of Maud and Frank, that is so brave and inspiring.

When the book opens, a 77-year-old Maud, pushes her way into the MGM studio lot where the film is about to be shot, produced by the Mervyn LeRoy and directed by Victor Fleming. She wants to ensure that her husband’s vision is respected.  Of course, the persistent old lady is looked upon as a nuisance, but also given a pass to visit the set, where she first disapproves of a teenage Judy Garland playing Dorothy, till she hears her sing, and also observes the problems the girl faces, what with a pushy mother and studio honchos like Arthur Freed pawing her. Maud tries to protect Judy with the help of MGM boss Louis B. Mayer’s formidable secretary, Ida Koverman. 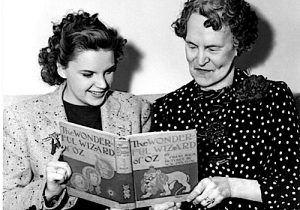 From 1930s Hollywood, the book travels to the 18th century where a young Maud grows up in the shadow of her suffragette mother, Matilda Gage. Her parents scrimp and save to send Maud to Cornell University—she was among the first women to seek higher education in the college that had just opened its door to female students. Amidst the jeering male students, an outspoken Maud refuses to be a “potted plant” like the other girls. Still, to her mother’s disappointment, she drops out of college to marry the charming and talented theatre man L. Frank Baum. The Baums spend the early years of their marriage touring with Frank’s productions, till financial difficulties force them to move to Dakota, where new settlers are setting up their farmsteads and businesses, and later to Chicago, when drought kills the region’s budding prosperity.

Frank is capable of putting on entertaining shows for his four sons, writing amusing verses and stories, but is not very good at business or making money, so the first few years of their marriage are tough, but still not as terrifyingly indigent as the life of her older sister Julia, married to an alcoholic, younger man.

Maud contributes to the household by her sewing and embroidery work and is completely supportive of Frank’s dreams. Woven into their story are the elements that find their way into the iconic books that made Frank a much-loved author— incidentally, this year in May, was his hundredth death anniversary, and 2019 is the 80th anniversary of the film released in 1939, so there will be a lot of Oz-related events taking place wherever there are fans of the books and film.

Meticulously researched—the author’s note is as interesting as the book—Finding Dorothy may have some sketchy bits, but on the whole it is enjoyable and also quite informative about the period when Hollywood was growing, and so was the women’s movement that led to contemporary feminism. Unfortunately, Matilda Gage was not alive when women finally got the right to vote.

The film was nominated for six Academy Awards, including Best Picture, but lost to Gone with the Wind, also directed by Victor Fleming.

The Madness Of Crowds – Book Review

When No One is Watching – Book Review