As Ila Arun starts rehearsals on her adaptation of Ibsen’s Hedda Gabler, here’s revisiting an interview with her.

Ila Arun’s life is a whirlwind of plays, films and music concerts. She returned from Hyderabad after a performance of Namaste, and was off to her native city of Jaipur and in between, at an evening suffused with the warmth of her family, friends and members of her theatre group Surnai, she received the Royal Norwegian Order of Merit, Knight 1st class,  from Norwegian Consul General, Ann Ollestad, for her work in strengthening Indo-Norwegian cultural ties through her Ibsen Festivals in Mumbai and her adaptations of the Norwegian master’s plays. (Not very well-known is the fact that she also did a play called Death Variations by contemporary Norwegian playwright, Jon Fosse).

The date June 11, 1982 is one that she remembers with pride; this was when she had established her group Surnai, with constant collaborator KK Raina, and others like Vijay Kashyap, Ravi Jhankal, Anjula Bedi, who are still associated with it.

Her Indian adaptations of some of the plays of Henrik Ibsen, have given her the opportunity to give voice to issues that concern women. “All my plays are centered around women, right from the early days when we did Riyaaz and Jameelabai Kalali, but Ibsen gave me the rights words to express myself.”

Her journey with Ibsen began when Nissar Allana (Delhi theatreperson), who had been doing Ibsen plays approached her in 2010, with the idea ‘Ibsen in Tradition.’ “He wanted to invite women directors, who are involved with authentic traditions, like I am with Rajasthani folk,” she says, “To be honest, I had not read much Ibsen at that point, except A Doll’s House. I wondered what he meant by tradition, and when a director like KK Raina was sitting there, why was Nissar asking me and not him to direct? He said tradition was my forte and that I must do any Ibsen play in the Rajasthani tradition. It seemed daunting, and I did want KK to be my co-director.”

Then began her serious study of Ibsen’s plays to decide which one to adapt, and to everyone’s surprise, she picked Lady From The Sea, called Mareechhika, and set in the deserts of Rajasthan. “This is where my familiarity with the landscapes, people and music of Rajasthan came in handy when I started work on the adaptation. The heroine, Rampyari, falls in love with a sailor, but is forced to marry a much older doctor, and in the end, she has to choose. This freedom to choose is seldom given to women even today, and Ibsen wrote about it over a century ago (in 1888).  There are parts of Rajasthan bordering Gujarat, and the sea is nearby, so it was not impossible for her to meet a sailor. The doctor became a vaid,  his mountain abode was Mount Abu and her tendency to bathe in the sea was very convincingly set in the bawdis or step wells, quite common in the region, and to depict her swimming, I used the ghoomar dance. Once the story was adapted, I had to determine the form, and I used the folk style of storytelling, Pabuji Ka Phad, in which the bhopa-bhopi (narrators) tell the story using a phad, which is a long scroll painting. I got a 12-foot-long phad made in Jaipur, and instead of the usual mythological figures, I had Ibsen and characters from his stories painted on it.  But the main thing was that in India, there were so many ways to curtail a woman’s freedom—child marriage, sati-jauhar if the husband died, or a terrible widowhood, being married to old men. I could comment on women’s issues and on how and why Ibsen supported women in his day. It was creatively a very satisfying experience for me.”

Ila Arun then not only did more Ibsen adaptations, but held a festival his works by other groups. “Ibsen is surprisingly popular in Maharashtra, Bengal and Kerala; A Doll’s House must have been done thousands of times in Indian languages. I also realized that India is today what Europe was like 150 years ago, as far as women’s issues go, and then it was not so difficult to adapt his works in Indian settings. Some may that he is outdated or boring, but I find his plays very relevant.  I did Ghosts as Peechha Karti Parchhaiyan, and set it within the palaces of erstwhile Rajasthani royalty.  It was very common for the men to have affairs and women to put up with it; illicit liaisons with maids were not unheard of. In Ghosts, the young man gets infected with syphilis; today it could well be AIDS.  It became a play about the suffering of the women of Rajasthan and it doesn’t seem borrowed—I think I made it my own, there’s my own anger in it.” 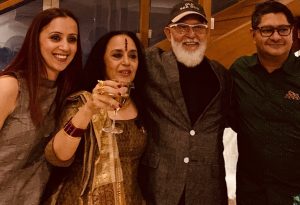 The most difficult adaptation was Peer Gynt,  a five-act play in verse, which Arun set in Kashmir, because of  the similarity of the snowclad mountain locations and the fairy tales woven into it, which worked perfectly in Kashmir. “There are trolls in Ibsen’s plays; in my Peer Ghani, I suggested that these were terrorists. Those who got it, fine, for others, it was just a fairy tale.”

Her next Ibsen production will be Hedda Gabler, or Hardeep Kaur Gill, which she intends to set against an army backdrop in Pune and the Punjabi settlements in Mumbai. “I see Hedda as a girl of today, headstrong and ambitious. I am putting the finishing touches to it.”

Meanwhile Ila Arun recently co-directed with KK Raina, American playwright Tammy Ryan’s Baby’s Blues, about post-partum depression, a subject not often talked about, leave aside put on stage.  “I would have liked to adapt it, but the playwright did not want any changes. So I did the play in English, with actors from the English stage (Dilnaz Irani, Meher Acharia-Dar, Ankur Rathee, Joy Sengupta) because, for me, it was important to address the issue. There is also another reason for doing an English play—the spaces and audiences for Hindi plays is shrinking.  I do a play like Shabdleela on the works of Dharmvir Bharti, to try and preserve great works of Hindi literature, but it’s a problem to get dates to perform it in Mumbai.”

Her daughter Ishitta Arun, founded her own theatre group Ikigai and did her first production Gaa Re Maa earlier this month. “What can I say?” laughs the proud mother, “today’s generation wants to do their own thing.  Ishitta wanted to do plays of different genres and she had the energy to organize everything, when all this while, she had everything readymade for her. She says, she wants to do plays with more masti, not just thought-provoking like mine.”

Finally, what is it that has kept her working with KK Raina for 35 years?  “For one thing, unlike other NSD people, he does not have a false ego. He never asks why I get the limelight when we work together—it’s not that I seek it deliberately. We do get offers to work with other people, but then we find we are more hard-working and involved with everything, we rehearse a lot, which so many others do not do. Ours is a good combination, we work well together and it is partnership of trust and inspiration.”

Subscribe To My Newsletter For New Posts And Stay Updated!