When Imran Rasheed did a play called Phir Se Shaadi on the problems arising in the life of a young couple due to the Islamic practice of halala, Naseeruddin Shah told him he thought only hooligans came out of Bulandshahr, not artistes, referring to the producer-writer-director-actor’s hometown, in the news for lawlessness.

Imran grew up in Bulandshahr and then went on to Aligarh Muslim University for further studies. “Theatre was farthest from my mind. Nobody in my family had even heard of it. Then, when I went to Aligarh, I discovered the world of theatre; because Naseeruddin Shah was from Aligarh, he was talked about a lot. I heard of Nadira Zaheer Babbar too, because she has an uncle in that town. I was up to the usual badmaashi (mischief), almost getting into student politics, when a friend suggested I get into theatre. There was a theatre club there and I joined up. When I was a kid, I had once seen a street play by a cousin. They were very different people, and my mother disapproved of them–because they were communists and had once cursed God in her presence. After that she even kept their eating utensils separate from ours.

“I had no idea till I came to Mumbai that there could be professional theatre and regular shows, that plays ran for years on end. In Aligarh, we did thirty-minute shows and after one performance, a play folded up. I believed that is how theatre is done. Over here, even college-level plays are so good, our work was third class in comparison. Back then, when I joined the club, it was a zabardast  shock to me. I had no idea what I wanted to do in the theatre, but for the next five years, I went there every single day; I started doing some plays and connected to people from theatre.”

In 2002, Imran came to Mumbai and joined Nadira Babbar’s group Ekjute. At first he was a teaboy, cleaner and general dogsbody, but, he says, he learnt how to mount a play and run a group from his years with Ekjute. “When I first went to Prithvi Theatre, I was zapped to see Makrand Deshpande—I had seen him in the film Satya—step out barefoot from his Maruti 800. Ila Arun was casually moving a No Parking sign. I could not believe my eyes; I thought to myself bhai yeh to bahut class jagah hai (bro, this is a classy place). When I started working with Nadiraji, at first I was speechless. I could see the hard work and focus that went into a play. I thought plays came out of books, and then I saw Nadiraji writing a play while rehearsing, and watched how a play came to life. She gave me short pieces to direct in her productions and liked what I did. I blossomed here, I learnt how to write, direct, act.”

He also started acting in plays by Makrand, Akarsh Khurana, Manav Kaul, but the most thrilling for him was the discovery of his writing talent. “Because I had learnt everything from the bottom up, I found this medium clear and easy for me. Writing is a habit and shauq (passion) now; I can write a play in ten days and put up a production in fifteen or twenty days. I saw how Mak Sir used write a few pages, get his actors together, wrote them into the play after a lot of improvisation. This has become my style too.”

This apprenticeship period eventually enabled him to form his own group Rangbaaz, with friends like Pawan Uttam, Sumeet Vyas, Shivani Tanksale and others.  “I had been asked by Rashmi Sharma Telefilms to write a serial; after some time I told them it was not my cup of tea. So, the boss Pawan Kumar Marut, asked me what I wanted to do and I replied, natak (play). He asked me how much it would cost, and then just handed me a cheque. So, amazingly, I had the funds, but no play. Then someone recommended Shaukat Thanvi’s book, Budbak, which I adapted into Bade Miyan Deewane, adding a lot of humour to the already funny story. I invited a bunch of actors, we did readings, they gave suggestions and our first production was off the ground. For so many happy months we rehearsed and partied with hardly a thought of going home. I had no thought of forming a group, It happened by ittefaq (chance).  Actors from other groups worked with one another, there was no rivalry. These groups splintered and new groups formed—I saw this amazing process take place in front of my eyes. It was a heady time.”

Over the next decade, Rangbaaz did fourteen productions like Papa, Jungle Book, James And The Giant Peach, Ek Poora Din, Pittras Ka Ras, Phir Se Shaadi; Imran wrote and directed six. “I don’t think I want to do everything. Rangbaaz is what it is because other directors like Pawan Uttam, Sumeet and Shivani, Gagan Dev Riar, Raghav Dutt, Nitin Bhardwaj did plays with the group. So many talented directors and actors have emerged from Rangbaaz. I did not dominate the group, I gave opportunities to others. And I think this experiment worked, because it brought in so much dedication and variation to our work. I took risks and good things sparked because of the people who were attached to Rangbaaz.” 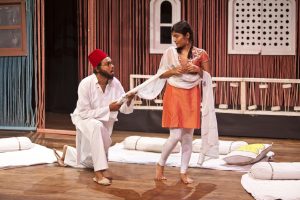 The uproariously comic Bade Miyan Deewane, a Molieresque play about an old man (played by Imran) falling for a young girl, remains the group’s most successful production which, Imran thinks, taught him how to connect with audiences, “A line we thought was funny sank without a laugh and the one we thought was okay had them cracking up with laughter. It takes about ten shows for a play to grow and settle, and it is a process of constant research on what audiences will enjoy.”

His last production, Phir Se Shaadi, through which a powerful social message conveyed with humour, has been turned into a film, retaining most of the actors from the play. “Like I never learnt to direct a play, I never formally learnt film direction–it just happened. I think a director’s prime task it to get the actors to perform well– the technicians do their jobs well anyway—and this I can do.  I bring theatre disciple to a film shoot—I was the first to arrive and the last to leave, and though we were shooting in winter in Aligarh, we had a great time.”

Imran is now busy writing his next play Mazhab, about a man who finds he is worth more dead than alive. “It is a strange story, and like everything I write, somehow connected to my own experiences. Even the incidents in Phir Se Shaadi actually happened in Aligarh. In Mazhab, I also want to include what is going on around us, this atmosphere of fear that Naseerbhai talked about, and look at the backlash he faced.”

The old team of Rangbaaz has wandered off to do their own thing. “I miss the old days,” he says. “The foundation of something is laid with such sincerity, but money ruins everything. Still, I believe it is important to keep working, people come and go. I started out without clue as to where I was headed, so all things considered, it has been a mazedaar (enjoyable) journey so far. I keep working without a concrete plan, but somehow things fall in place. I discovered myself through my work. Now I can do anything… theatre made my shakhsiyat (personality), so I can never ever leave theatre.”

(This piece first appeared in The Hindu in February 2019)