It has been twenty years since Jaimini Pathak established his own theatre group—Working Title—and produced about 18 plays, directed and acted several of them, wrote one, along with acting in the plays of some of the best directors in the city. The years have been enviably kind to him, which sometimes causes a peculiar problem for film or webcasting directors—he looks too boyish to be cast as a middle-aged man, but is not young enough to play a youngster.  “It’s genetic,” he says, “my parents also look much younger than their age, so it’s thanks to them.”

After spending his childhood all over the South and then Ajmer, because his father, who worked with the railways, had a transferable job, Jaimini fought the usual middle-class expectations to study science and become an engineer or doctor, landed in Mumbai’s St Xavier’s college to “suffer eco-stats double major” and stayed in the hostel. “The college had a fantastic library with so many plays. I don’t think I have read as much in my life as I did in college.”

When he was in the second year, some friends planned to do a workshop with Mumbai’s theatre maverick Satyadev Dubey. “I didn’t know who he was, I didn’t know anything. Ultimately, I was the only one who enrolled in the 40-day workshop.  He was working on one of Shaw’s prefaces, Extermination, after which we did production and performed a few shows. After this workshop, I decided theatre is what I want to do. Then Dubeyji said, there’s this guy, Sunil (Shanbhag), who is doing a play, go work with him.  So for a long time, I ended up shuttling between Dubeyji and Sunil’s plays. Naseeruddin Shah saw me some of them and cast me in one of his plays. I was thrilled, Aisa Bhi Hota Hai, that someone like him calls and without an audition or anything, says, here is your role! These days, there are auditions, back then people watched an actor on stage and decided if he was good.”

Turning up for rehearsals and memorizing whole plays was his “survival strategy.”  Dubey used to have an associate director, whose job was basically to remind him on his lines; in the process, Jaimini used to learn the script from beginning to end and if any actor dropped out, or was thrown out by Dubey –“as was his practice”–he could easily step into the part.

“Dubeyji gave you a lot, but he also extracted a lot out of you—he was a terror.  Even now, my default mode for a rehearsal, or show, or shoot is anxiety. Over the years, I have realized this and learned to control it, but, a puppy who has been beaten up, never outgrows the trauma, and always has a knee-jerk reaction to a kitten or whatever. He was like a colossus, who took everybody along with him. It was a different era—there was no TV, there was no such thing as a fulltime actor, so we turned up for rehearsals whenever we were called.”

Jaimini solved the near-impossible situation of finding affordable accommodation in Mumbai by extending his courses at the university and staying in the hostel. Then he was cast as the lead in a TV serial, Farz, and that was the end of money trouble. “When I look back,” he says, “life has been something of a miracle. The right thing happening at the right time, with the right people. There was a time in the mid-Nineties when Makrand Deshpande wanted me to do a play with him and said I was already doing five plays, how could I fit in rehearsal time for a sixth?”

Eventually, he turned to direction, because, “I had already worked with all the directors on my bucket list. Besides, if you work with the same bunch of directors, they can’t cast you in every play, so then do you sit around idle?  The best thing about working with people like Dubey and Sunil was that by default you do everything—sets, lights, sound operation, buying costumes and props. I think I was always interested in directing—I used to give suggestions which were always accepted.

“Then Ramu Ramanathan gave me Curfew, which he said nobody else wanted to do.  Sanjna (Kapoor) gave me a slot at the Prithvi Theatre Festival in 1999. The group, Working Title was born. I don’t like the name, but it stuck.”

The Ramu-Jaimini collaboration lasted for years; he directed many the playwright’s works including Combat,  3, Sakina Manzil, Postcards From Bardoli,  and two of his longest running plays Mahadevbhai (1892-1942) and The Boy Who Stopped Smiling, which are still on. “The working relationship with Ramu is very symbiotic,” he says, “There was a time when he would write almost for me. Combat was way ahead of its time, he predicted what is happening in the country today. Mahadevbhai (based on the diaries and letters of Mahatma Gandhi’s secretary) was written because of what happened in Gujarat (the Godhra incident and the riots).”

He prefers doing plays that have something to say, beyond the craft, and is always on the lookout for such work. “I have been reasonably prolific, most of my plays have done at least 40-50 shows, except a couple of star-crossed ones like The Seagull. The huge problem with doing a Chekhov play is that if an actor drops out, he cannot be replaced. I could spend all my time re-rehearsing, but it will never match up to the original vision. That’s why I leave the classics alone and do new and original plays which have something to express and would stimulate the audience.  I like doing plays that stay with you for a long time, ideally for a lifetime.  It is possible—I have people who watched The Boy Who Stopped Smiling or Once Upon A Tiger as kids and still remembers them. They come up to me and tell me they follow me on Facebook. That’s why when I don’t find something for a long time, it becomes a problem. For a long time, it was convenient, Ramu would write plays and entrust them to me. If I am to do classics, I would like to make them my own, the way Rajat Kapoor has done Shakespeare by capturing the essence, and never mind the purists!  I would like to a modern version of Tagore’s Sanyasi, which I can see through and through, or a modern version of Shakespeare’s Julius Caesar, which I can also envision. But how to find 12 actors?  It’s sad when the logistics defeat you, and you have to do plays with one or two actors.  It is difficult to make money on our kind of plays unless there is a tour. I always pay my team; I remember Manav Kaul, who did backstage for one of my plays in Pune saying that the Rs 500 I paid him was his first theatre ki kamaai (earning from the theatre.)” 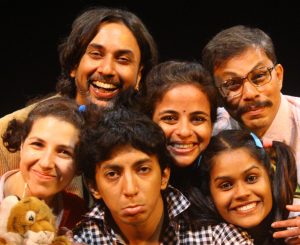 The Boy Who Stopped Smiling

The work he considers most precious is with children and young people; before it became a trend for theatre practitioners to work with schools and colleges, Jaimini was involved with it. He wrote a lot of short plays for children, as well as one full-length play, Once Upon A Tiger, about wildlife conservation, which was funded by Bittu Sahgal (well-known conservationist), who also gave the group a place to rehearse in a city nature park.  “I find it easier, or rather less intimidating to write for kids than for an adult audience. Also, I am not disciplined enough to be a writer. It is a very difficult craft and the best writers just write every day whether they are in the mood or not. I remember reading somewhere that children who do theatre in middle school, grow up to be less aggressive or have fewer anti-social tendencies. Sadly, hardly any plays are being written for children in India.”

Meanwhile, resisting the urge to run an assembly line production company, and rediscovering himself as an actor with web series, he continues to be energized by Mahadevbhai, which after 350 shows, still checks all the boxes he looks for in an ideal production. “I can do it even when I am 75. Earlier I was a young man playing an older character; then I can be an old actor playing a younger man.”

No Fathers In Kashmir – Movie Review