Devika Rani returns for another run– posting an interview with the prolific Joy Sengupta:

Joy Sengupta has at least four plays running at any given time, he also does films, ads and web series, which would pack any actor’s schedule to the brim. Still, he makes time to watch plays, reads a lot, attends film festivals, supports causes and does extensive research on some of the roles he selects, like the recent Devika Rani, directed by Lillete Dubey, in which he played movie legend, Himanshu Rai  (in pic) opposite Ira Dubey in the eponymous role.

“Some plays connect with you intrinsically,” he says. “Like Himanshu Rai, I am also extremely passionate about theatre and cinema. More than talent, I am driven by passion. I work very hard to get a grip on the character. I compensate for my average talent—I am quite aware of that—with dedication and research. Himanshu Rai belonged to the period when the country was colonized, but the Bengal Renaissance still happened. Because of Tagore, Vidyasager, Ram Mohan Roy and others, there was a churning in society, art and culture. Rai was a direct product of that Rensaissance, so was Devika Rani. He was one of the earliest Nehruvian characters and I could identify with his passion.

“I always try to break down each role to its simplest form. When actors try to intellectualise, not everything gets conveyed to the audience.  I broke down Himanshu Rai down to his unending passion in pursuit of establishing a new medium of cinema. He had many failings, but his aspect redeemed him. When I played Gandhi, in Sammy, I did the same thing. I didn’t want the big baggage of Gandhi, I broke him down to a very simple, average, Vaishnav boy from Kathiawad, then, his search for the truth and his moral centre. There was also the research—reading, watching footage, hearing his voice, getting his body language right, but not mimicking. I bring in my world view and my own elements to every role and I would like to believe, it elevates the material.  Of course, some directors are receptive, some are not.”

Joy spent the early years of his life in Delhi, where he did more plays that he can count, from street plays with Jan Natya Manch, to intense avant garde productions, that lasted hardly half a dozen shows, with the same handful of people in the audience. “It is only in Mumbai that I discovered the other side of theatre—that plays must reach the maximum audience, must go on for years, must do scores of shows for a play to realise its true potential. So, barring some minor plays, which the producer or director could not keep going, each play I did in Mumbai, survived five to seven years on an average—Dance Like A Man has been running for 23 years.”

In Delhi, he had started his own group, Act One, with the intention to do quality plays. “That was the time when there was a movement of avant garde plays, with crazy dramatic structure and multiple character shifts, which were great fun to do. We were mentored by a National School of Drama (NSD) batch of 1981-82, that had started its group Sambhav. They trained us, workshopped with us, introduced us to quality theatre and also put the grain into our heads that theatre is not merely for entertainment, it is not divorced from everything else. Before that, going up on stage was for enjoyment, the seriousness started there.

“When I came out of college, the big question was, should I take up theatre as a profession—I hadn’t even thought of films and television—or should I balance it with something else, like advertising. A lot of theatre people back then had jobs in ad agencies, banks, railways, that’s why they could do such good theatre—they were not victims of the market. They ran a group like an organization; every evening, all year round they gathered at their dedicated rehearsal space, and did readings, poetry recitation, discussions. In those days, the very act of choosing a play was socio-political, not just chalo natak karte hain (come on, let’s do a play). Play writing then, as opposed to now, was a voluntary social activity, because playwrights never made any money. They were intellectuals, academics, who found an outlet of communication through plays. Playwriting has gone down a few notches in content today, because the writer can work on films, television, web, they are not dedicated playwrights.

“I also wanted to study theatre, but not at NSD because people who came out of there either got stuck with the Repertory, which was like a government job, or came to Mumbai to do films.  Both options were problematic for me because I wanted to balance my freedom and my quest for theatre.  Going to RADA (in London) was too expensive; after Anamika Haksar returned from studying at the State Institute for Theatre Arts in Moscow and did phenomenal plays, I thought of learning Russian and going there. Then, luckily, my idol, Ebrahim Alkazi came back to India and started the Living Theatre Academy, and I was accepted. I trained for four years, and it was intense. When I came out of there in 1995, the first person I met was Lillete Dubey.” 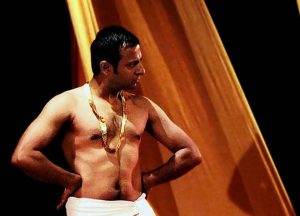 Joy looked down on English theatre in Delhi, which comprised mostly western plays performed by actors putting on accents.  “Lillete said she wanted to do original Indian plays and work with actors who were not from English theatre.  She wanted to give theatre respect, get paying audiences, and make it viable, which made a lot of sense to me. Till then theatre was a constant struggle.  Mahesh Dattani’s Dance Like A Man (in which he played a classical dancer), became a landmark. Even in Delhi, there was a stampede for tickets. That’s how the trip with professional theatre began, till then, for me, theatre was in the same space as academics or activism. Dance had a personal resonance for me.  It was like my own quest as an artiste and the question of the artiste’s position in a society that may have come out of a feudal structure and gained political freedom, but where freedom of expression is still in a crisis. When I speak those lines, it is as if I am speaking not just for myself, but for many of us.  Because, for me, what is truly spiritual is art, the way you connect your inner spirit to a higher understanding is through the arts.”

By this time, apart from teaching and directing plays in schools, Joy had started acting and anchoring shows for television. One such show, Question Of Cricket brought him to Mumbai, and he was cast by Anahita Uberoi in a play called If Wishes Were Horses. He got offered more plays, TV shows and a film, Hazaar Chaurasi Ki Ma by Govind Nihalani, and he moved to Mumbai. “The beauty of it, is that theatre never stopped. I acted in plays with Feroz Khan (Dinner With Friends), Rahul D’Cunha (Class of ’84, Lillete had also shifted to Mumbai and recast Dance Like A Man.  These plays not just became popular, they lasted. And no matter for how many years they are performed, every time I step on stage, it is like the first show for me.”

He tried to form a group in Mumbai, but discovered it was difficult to keep people together. “One call from a serial or film and they are gone. I am too much of an idealist to work around that. To be able to do theatre, I never pursued a career in mainstream Bollywood. Besides, I would never have fit in to the action or romantic films of the Nineties. Theatre always gives me better characters and more satisfaction. I am a journeyman actor, I work partly because I need to and partly because I like to. With films in the art house space, voicing work, teaching, ads, web series, my needs are sorted, the rest is devoted to theatre, travel and doing other things that interest me. Money was never a motivation, I also want stimulation.”