Last year, when this interview was done, Makrand Deshpande had hit a career milestone of fifty plays with a boisterous farce, Epic Gadbad. He (with his group Ansh) has subsequently staged two more plays, Pitaji Please (https://www.deepagahlot.com/pitaji-please-play-review/), and Ram (in pic) mostly absurd and entirely unpredictable, often growing out of prosaic ideas, have earned him a devoted fan following.
But for him, the excitement of writing, the constant experimenting, the gush of ideas that need to be put on paper and then on stage, is more exciting than fame or success.
“It’s a journey,” he says, “after doing so much when I look back I realise that from chaos I reached clarity. On that journey one saw life also and what seemed absurd before, now looks more like wisdom. Now I feel the best part of this path I have made is that I can get actors who are willing to give me 10 to 12 hours a day. I tell them, can you afford to get up in the morning and come to rehearsal?  It has becomes a way of working for me. You can see the results.  I could have worked with more established actors also, but to arrive at a form, time is needed. And nothing comes easy. For this play I must have invested 400-500 hours.
“A farce has to constructed, deconstructed and constructed again. I enjoyed this process so much that I am feeling a new me is born.” 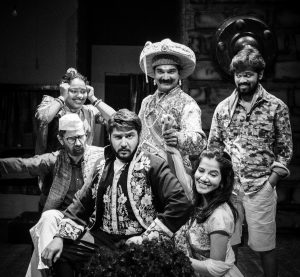 Epic Gadbad grew out a recent play Shakespearecha Mhatara —one of the few he wrote in his native language, Marathi. In the play a character even says that the Marathi theatre people don’t consider Deshpande as one of their own because he writes in Hindi, and the Hindi theatre people resent a Maharashtrian churning out Hindi plays.
“When I wrote Shakespearecha Mhatara, I turned the tragedy into farce in the second half. So I thought, why not work with a farce and then explore the layers. The absurd plays I wrote earlier were more poetic. I tried to draw out beauty, now it’s all exaggerated. You will find Brechtian tones to it. There is a lot if effort, even though it may look like gammat (fun) and effortless.”
Deshpande’s plays have an unfinished quality to them, like he had more to say, but halted at some unscheduled point. “Because it takes time for a play to be finished and I am not in a hurry. When I look back now, I think Sir Sir Sarla is finished… but I also feel till I  am alive I can keep working on my plays. I want to revisit and complete Jungle Ke Paar and I because I still find their concepts exciting, but then I have half a dozen plays written till the interval, waiting to be completed.” 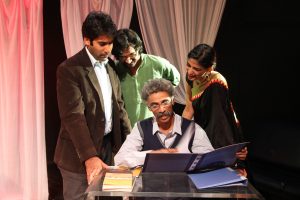 He stepped of his comfort zone to collaborate on a play, Meri Maa Ke Haath,  with Nadira Zaheer Babbar and direct a Gujarati version of Sir Sir Sarla but it does not bother him at all, that his fame as a playwright is limited because his plays don’t travel much and very few of his plays have been picked up by other directors. “What is the difference between, say, (Vijay) Tendulkar and Makrand Deshpande is that I am a writer and director and producer,  so I am constantly evolving. He was dependent on others to produce and direct his plays, so he would decide when a play was complete and then say that not even a bracket should be changed. For me, I can’t work in a closed room. After my first draft I involve my actors and start working with them, and then keep altering. Sometimes the director in me tells the writer in me that here’s a subject, so I have already seen it in  my mind. These days, I don’t act in all my plays, though I am told I must, because only I know the essence of my writing.
“I don’t much care for theatre festivals, though when my plays have gone to Jaipur and Bhopal, audiences ask why they don’t see more of my work. But I am alpasantusht (content with little). What do I have to prove and to whom? I did my own festival  with 10 plays that I had written and directed; I acted in nine, two shows every evening, and I lasted. Ashutosh Gowarikar (filmmaker and close friend) said it must be a record and I must tell the world. What can I say? Some people have a penchant for records, I don’t  Maybe that’s why I can write, if I were to be caught up in numbers I may not have been able to… I want to remain as I am. The Hollywood director, Chuck Russell had come to India to make a film, Junglee, in which I acted. He happened to watch Shakespearecha Mhatara. He didn’t understand a word, but he was  zapped. He said you must come to Broadway. I believe that instead of me going there, someone should take my work there. I have no interest in promoting myself. There are some people like Naseeruddin Shah who appreciate my work. Niladri Kumar, who collaborated with my on Patni, said people are afraid of me of the volume of work I do. I work for the love of it, not to make a living. For my bread and butter I do films. I have worked in films in several languages. I enjoy the travel and meeting people. I get time to write between shots.”
Deshpande has never been tempted to write for films. “I know theatre is the medium for me. Theatre is about exploration, not finding an easy way. Till a play is staged you can’t tell if a playwright is successful. And you have to be honest. It was never my intention to write a classic. If you set out with that idea it is anticipating too much, too soon. I have written a musical and I have offers of finance. But something is holding me back. I am just used to producing my own work. I don’t have to go out to impress anybody. I do films to fund my plays.
“My lifestyle is simple. I still live in a rented flat. I believe that if I get lost in my work, something will emerge, so I am never afraid of losing myself.  I am a Sufi in a way. I believe that that the world exists because of Sufis, people of the spirit… people who paint outside the canvas. Who sing from the soul. Art should reach there (points upwards), craft is all very well. That comes from practice. I am aware that the way I live and work, I will have to write till my last breath.”
He has made films on some of his plays, but none made an impact. “My concepts are for theatre, that’s where I see them when I write. I like this medium so  much. I enjoy the empty stage when I stand there before a play; I enjoy the moment of darkness before the start us lit. For an audience it’s just a blackout for me it is a chance to create. That’s the strength of this medium. So for me, the definition of theatre writing us different.  I think people should not be literal in a play, like specify if a scene is set in a bus or train. A play must also exist in the imagination.”
(This piece first appeared in The Hindu on July 27, 2018)
Makrand Deshpande Interview
FacebookTwitterGoogle +Pinterest