It was in January 1979, a couple of months after the inauguration of Prithvi Theatre in Mumbai, that Katare formed his group, Yatri, and staged the satirical play Ek Tha Gadha.

Over 41 years, Yatri (which means traveller) has staged over 55000 shows of 75 plays; Katare has written about 20 plays, directed most of them, conducted numerous workshops and extended the scope of theatre to include product launches for corporates.

The annual Yatri Festival this year, has a new play, Perfect Family– which is a comedy about how families have changed in today’s tech-savvy times– along with some of their old favourites like  Chinta Chhod Chintamani, Ravanleela and Jeene Bhi Do Yaaron and Hum Paanch,  along with workshops, talks, fringe shows, and the start of a series of reading enactments of Indian classics. 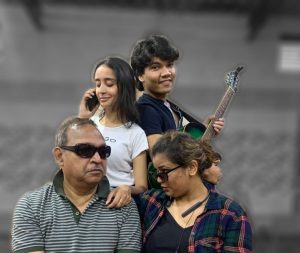 Yatri’s most successful play has been Hadh Kar Di Aapne about a middle-aged couple who suddenly find they are to be parents again. “I know, Badhaai Ho on the same subject has been a big hit. I had been taken by a friend to meet a major production company, and they turned down the script—they didn’t understand that a story about a family will never fail, these emotions are in-built into the Indian psyche. Our other superhit play, Chinta Chhod Chinatamani is about a joint family, and the emotions resonate with audiences everywhere, who miss the warmth of living in joint families.”

Katare believes that the biggest challenge for a theatre group is to find good scripts. “We had decided right at the start, that Yatri would do family-oriented plays that a regular audience can understand. Whether we do a serious play or a comedy, it is such that families can watch them together.  Of course, some of the productions I personally liked very much failed—like Savita Damodar Paranjpe, which was a psychological thriller, and Chakra,  about reincarnation.  We recently revived as a musical, a play based on Harishankar Parsai’s story, Rani Nagfani Ki Kahani, which had done well earlier, but this time it did not work. I realized that today’s audience is cut off from Hindi literature and probably could not understand Parsai’s humour. So, to figure out what audiences will like always causes some tension. Gimmicks cannot take you very far, ultimately a play should be able to succeed on its own steam. People always expect something new. Theatre veteran Kamlakar Sontakke once said that theatre will survive only when tickets sell at the box-office window; then it will not need to plead to anyone for support.

“Frankly,” he continues, “we have been working for over 40 years, but there is no fun doing theatre any more. It has become a money game.  People do very large, expensive productions and then have to charge high ticket prices, which most audiences cannot afford. ‘Housefull’ has become a criterion, quality has taken a backseat. There is also the shortage of dates in auditoriums. If we want to do a proper production with sets, music and all, we have to be able to do regular shows, so that actors can be retained too. That is impossible now. If we travel, then we have to go by air, because actors these days are busy with shoots and can’t spend so much time in trains, but how many organisations that invite groups to perform in their cities can afford air fares? Still, we do manage to tour when we can.”

Katare is all praise for a Nashik school that not just brings its students to Mumbai to watch a play, but also invited Yatri to do workshops in their school. “There is so much talent in our country. If other schools also emulated this example, theatre would benefit a great deal.”

Unlike many other theatre folk, Katare did not abandon the stage for films or TV. “I could not have managed a group for four decades years if I had been distracted. I would have liked to do films, but if I told them that I will take time off to do my plays, who would want to make those date adjustments? They might do it for a star, not for anyone else.”

His dream is to do a production of Draupadi, based on a story by Pratibha Rai. “It is a unique take on Draupadi’s life. It is such a strong play, that says that there has been very little change in society’s attitude towards women from Draupadi’s time till the present.  Whoever has heard it wants to be a part of it.”

Looking back over his years in theatre, he says, “It’s unbelievable, it’s something I never imagined. The journey has not been without obstacles, but the blessings of Rangdevta (god of theatre) must have been with it, because without that nothing can work. Somebody up there has been watching over us.”

The Ghost Of The Mountains – Play Review