As a tribute to Basu Chatterjee, who passed away on June 6, 2020, a look at his quintessential Mumbai film:

At the peak of his prolific filmmaking career, Basu Chatterjee became the de facto chronicler of India’s middle class, the section that is often overlooked by films, because it lacks both grit and glamour. 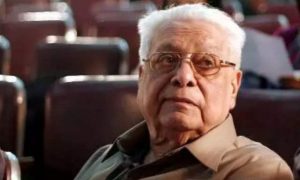 Perhaps audiences outside Mumbai would not appreciate Piya Ka Ghar (1972) as much as a viewer living in a space-crunched city, where a ten by ten kholi is considered spacious. Mumbai also has the unique chawl or chaali system of housing –basically one-room tenements with common bathrooms and toilets, and a balcony running around the structure. Despite the cramped living, with no privacy, chawls form a large supportive community.

The tenements originally built for mill workers came to house lower and middle class families that could not afford better apartments. Piya Ka Ghar (1972) is about one such loving family—the Sharmas.

The senior Sharmas (Agha and Sulochana Chatterjee) have three sons; the oldest Shree (Suresh Chatwal) is married to Shobha (Rajita Thakur) and is involved with theatre, the middle son Ram (Anil Dhawan) is a clerk in an insurance company and the youngest, cricket-crazy Hari (Master Suhas) is in school.

Sharma senior has retired and spends his days gambling with his buddies (Mukri and Keshto Mukherjee). In the one-room space a small partitioned niche has been created for Shree and his wife and it is here that they rehearse for their plays. Nobody is disturbed by the endless chatter and comings and goings through the open doorway.

When the film opens, a pandit has arrived at the home of Malti (Jaya Bhaduri) with a match for her. He tells her family that Ram lives in a five-storey mansion called Bharat Mahal, and that Malti will be treated like a queen. Malti’s uncle Gauri Shankar (Raja Paranjape) is absent when the marriage is fixed and is not quite pleased with the great rush in which the wedding has been planned, and that too to a groom in Bombay, but he cannot  stall it.

Today it feels strange that marriages were fixed by a matchmaker, without the families of the bride and groom meeting, and the couple not even setting their eyes on each other before the ceremony. But back then it was commonplace and a quick look at a photograph was all it took to set off a romantic reverie (the song Woh kaisi hogi jiski tasveer aisi hai) in the minds of young men and women, who had no opportunity or social sanction to choose their own mates.

When the wedding party arrives at Malti’s village, they are put up in style in a huge bungalow. Gauri Shankar does not like what he sees—a noisy, too casual bunch that mistakes him for the servant—but the wedding takes place regardless.

When Malti arrives in Mumbai she is shocked to see the shabby one-room tenement that will be her home. As her uncle says later, her dolls had a bigger space in the village  mansion. A make-shift bedroom has been organised in the kitchen, but the wedding night is disturbed by Malti’s unease at the open window, the thin walls, so many people milling about and a late night rush to fill water which flows in the taps without advance warning.

Malti belongs to a culture which dictates that a woman adjusts into her marital home, and she settles into a routine in the fairground-like atmosphere of the chawl, but all of Ram’s attempts at intimacy fail, because the couple just never gets a chance to be alone. Shobha understands, and engineers a couple of occasions when the entire family is herded out, but something or the other comes in the way. Like Ram’s friend Arun’s (Paintal) off-key advice or a boorish relative (Asrani) dropping by unannounced with his wife and cutting into the newly weds’ precious time together.

It’s both funny and poignant how couples in the city always manage to find a way to deal with the lack of privacy. Shree and Shobha use a hotel. The older Sharmas pretend to go to a religious movie and spend time chatting on the beach.

Malti is outwardly happy with the affectionate family, playing carom with Hari, rushing to the window in excitement when a plane passes overhead, but inside she does feel suffocated with this chaotic urban lifestyle and constricted space. (Chatterjee conveniently overlooks the problem of the common loos—in chawls people have to queue up in the morning with buckets of water. Bathing is done in the mori, which is a small niche with a tap, meant for washing clothes and vessels.)

Shree passes on to an increasingly frustrated Ram, their idea of visiting a hotel. Ram and Malti spend a day exploring the city, but when it comes to checking into a hotel room, he is embarrassed. Finally, they find a nice sea-facing room, but are interrupted by the cops looking for a runaway couple. This is the last straw for an already distraught Malti and she tearfully requests Ram to send her back to her village.

When they return home depressed, they find Gauri Shankar pacing up and down in a fury. He is aghast that his beloved niece lives in this “kabaadi ki dukan” (junk shop). He wants to take her back with him at once. The family requests for a day’s grace and all of them decide to do something for the couple. The parents decide to go on a pilgrimage, Shree and Shobha pack up to leave too, so that Ram and Malti can use their room. One of the card playing neighbours offers to sell his taxi, so that they can rent another place. Malti is overwhelmed by this outpouring of love and decides to stay on. When the uncle is reassured that she is happy, he returns to the village with a smile.

Chatterjee’s look at middle class Mumbai life is authentic, but with his characteristic  nimble treatment. It is also a tribute to the people of the city who, as the oft-repeated saying goes, have a lot of space in their hearts to make up for lack of space in their homes.

Based on the Marathi film, Mumbaicha Jawai (Mumbai Son-in-Law), Chatterjee’s film is warm, humorous, romantic and utterly feel-good, with none of the artifice Bollywood now passes off as realism.

Basu Chatterjee worked as a cartoonist and illustrator for Blitz for many years and was a film society activist. His first film, Sara Akash (1969) was one of the films that heralded the New Wave in Hindi cinema. Later, along with the films of Hrishikesh Mukherjee, Gulzar, Sai Paranjpye, his cinema came to be labelled as middle-of-the-road.

(This is an edited version of a chapter from my book Take 2: 50 Films That Deserve A New Audience, published by Hay House in 2015).