The city is in the grip of drugs, the cops are getting flak from the media for a spate of deaths of young addicts. In a meeting of police top brass, one of them says that to deal with this menace, a “normal” cop won’t do. To catch a “bereham”  (merciless) villain, you need a “bereham” cop. So Radhe, of the “97 encounters and 23 transfers” notoriety is summoned back from suspension, and Salman Khan gets to keep his Eid date with the box-office, even if the film’s Indian release is on an OTT platform (Zee5) that reportedly paid a fortune to acquire the rights.

Khan and his director Prabhudeva look towards Korean cinema again (Bollywood’s current go-to filmmaking guide) and pick Kang Yoon-Sung’s 2017 movie, The Outlaws. After being suitably Indianised to match Khan’s larger-than-life persona, Radhe: Your Most Wanted Bhai emerges, a ridiculous parody of the award-winning original. For garnish there is the old-style Bollywood bimbette (played by Disha Patani) to wear tiny costumes and chip in on the mandatory dance sequences.  When the actress (age 28), refers to the actor (age 55) as “cute boy” the character needs to be handed prescription glasses. But then, Jackie Shroff (age 64 and supposedly her real-life boyfriend’s father) plays her brother, so blame it on the myopia of the casting team.

In what could be considered a sequel to the 2009 film, Wanted, by the same star-director combo, Salman Khan even repeats the old punch line, Ek baar commitment kar di to main khud ki bhi nahin sunta.

Radhe makes an entry breaking a lot of glass and furniture, and leaves an army of goons writing on the floor, because their boss raped and killed a young woman. “All this for a girl?” asks the shocked boss. “No, for womankind,” replies the superhero cop. Imagine watching this scene in a moviehall packed with Salman Khan fans, and the whistles that would accompany the line. But there are not too many quotable one-liners in the film. There is not much plot either.

Radhe promises to clean up the city, so he first forces a truce between two local gangsters (Sudhanshu Pandey- Pravin Tarde), but the real power behind the city’s growing narcotics trade is the long-haired, hatchet-faced villain, Rana (Randeep Hooda), who kills first, asks questions later!  (One of the gang bosses is cut into pieces and stuffed into a suitcase, the sight of which makes tough cops gag.) 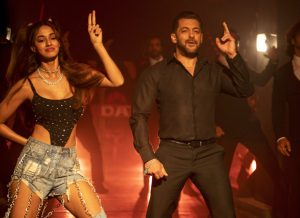 The film is divided into action set pieces—including one in a men’s toilet—and lavish dance numbers; if Disha Patani’s sex appeal was not enough, Jacqueline Fernandez fetches up to shake a leg with Radhe. To be fair, a plucky female cop (Megha Akash) is given a relatively significant role.

The little humour there is in the film is left to Jackie Shroff as Radhe’s incompetent boss, and it is really pushing it when he is made to dance in a strappy dress.

The stunts are done well– nothing that hasn’t been seen before. Prabhudeva’s stamp is all over the choreography, but the moves are without grace, or even an imitable hook step, that Khan always manages with his hit numbers.

Salman Khan’s efforts, cannot save Radhe from its sluggishness, and he really needs to work with better directors. But then, when his audiences do not appreciate it when he does attempt something different (Tubelight, for example), he is forced to fall back on the tried and tested.  However, the formula is fraying now, and needs to be ripped and tossed aside like that T-shirt which Salman Khan shreds in every film to flaunt the six-pack abs. Maybe that will also help him to grow from cute boy to distinguished man– a hint of whom one saw in Bharat and the two Tiger films.