As her group Being Association celebrates its seventh anniversary, rewinding to an interview with Rasika Agashe:

Rasika Agashe has done, and is doing, her share of commercial theatre, but she believes that plays should have some socio-political relevance. “I am terrified of the day my daughter grows up and asks me, when all this (referring to social injustice) was going, what were you doing about it? I should be able to give her some answer.” Her fiery production Museum…of Species in Danger, comprising a dozen monologues about women’s issue could be the answer to what she did when the Nirbhaya rape case rocked the nation.

“There is not much socio-political writing in Hindi,” she says, “talking about history, or the current situation. How are writers responding to it?  Are there even five plays about the Emergency? Hindi theatre does not move beyond man-woman relationship… it is cut off from major events. If there have been plays written, they have not reached us. As you know, we do not have a tradition of documentation in this country.”

Agashe, and the group Being Association she founded in 2013, with her husband, actor and fellow National School of Drama alumnus, Mohammed Zeeshan Ayyub, have been caught in the hurly burly of organising the Sanhita Manch Theatre Festival, that follows a competition for Hindi playwrights. It goes without saying that the plays are not just empty words, or form without substance. 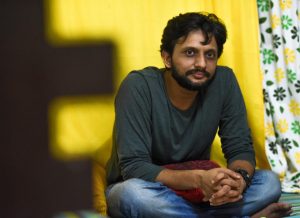 “I wanted to do a new play and I could not find any scripts. I don’t like the idea of commissioned plays; I would just get someone to write what’s in my mind, and it would be two minds working on a project. So the idea of organising a playwriting competition came about. We took it for granted that we will be able to find at least three play among the entries. Then we connect the plays by writers from different places with directors from different cities and hold a festival in Mumbai and elsewhere. There is another funny reason—don’t laugh—when I talk to senior directors, they always have personal anecdotes to share about playwrights they worked with. I thought, when I get to their age, who will I tell stories about? This way I actually meet the writers and have a connection.

Agashe does not believe the plays they do are elitist, they are “massy” too, but the problem is the lack of performing spaces. “The suburbs of Mumbai do not have enough theatres… or museums or libraries. See, we understand what is commercial. We want to work not just for bread and butter but also for jam. But that doesn’t mean we will not do good work. We are clear about that from the beginning.”

Brought up in Pune (“no relative of Mohan Agashe”), she started acting in plays right from school; in college she took up Sanskrit, “only because classes got over at 9.30 am I had the whole day to do theatre. I had no idea what to do with a degree in Sanskrit.”

Before she even graduated, she got admission into NSD. “I learnt everything there. Apart from Marathi playwrights like Tendulkar, Alekar, Elkunchwar, I didn’t know much. In the Sanskrit drama class, I could speak up, because I had studied some; in the other classes I kept quiet. My Hindi improved, I met Zeeshan there; we were best friends and had the same attitude towards our work. I stayed back in Delhi for some years after graduating, and had no desire to come to Mumbai. Had made enough to live on, we would not even have moved. Zeeshan and I did not come here to do films or TV. I believed I could live quite comfortably doing Marathi commercial theatre.”

Mumbai was an eye-opener. Agashe says she met every theatreperson she knew, but for a year and a half she did not get cast in any play. I did some TV because I was bored. Then I got Shafaat Khan’s Popatpanchi, my first Marathi commercial play!  The problem was that if I wanted to say something, I would have to direct, and maybe produce. That’s how I became a director, with Ramu Ramanathan’s Collaborators.

“The NSD stamp is also problematic in a way. You come out of the NSD prepared for professional theatre, and discover there is no professional theatre in India. We try to set up a repertory but how can we find actors if we can’t pay them enough to survive in Mumbai. We realized we will have to do films and TV to manage to fund our theatre work. I also realise we can’t work in the old style when all actors were available to rehearse; I am a pro now, I work around everybody else’s schedules. But actors come and go; some remain with us, do their other work and return to the stage when we need them.  But the scary thing is that everybody wants to be an actor. I am blunt with new people, I tell them it will take them years before they can even say a line properly, but the very next day, they sign up a serial. They don’t know anything, they never read anything, but they get up every morning and say, ‘Hum actor hain.’ They don’t see the struggle that goes behind becoming an actor in the true sense. I find that really scary.”

The dream is project called Food For Thought to provide books where they are needed, a work space where they can do their theatre the way they want to. “After doing so many films, Zeeshan knows fame is a by-product. We do commercial stuff to keep this meaningful work going. We want to make a strong base, do more smaller plays. Maybe one grand play in Marathi. Zeeshan still wants to work the Delhi way with months of rehearsal and a let’s-see-how-it-goes attitude. I pick a date to open a play and work backwards. What I really need is an uncle or aunty type of person, who will look after everything like funding and dates and travel, so that I can direct in peace. I am still looking…”