What they say about luck meaning being at the right place at the right time, applies to Seema Pahwa. She was at a party when Naseeruddin Shah asked her if she’d like to do a reading for his group Motley (that completed 40 years in July this year).

“I went over, he gave me a story to read, he liked the way I did it, and just like that I was in Katha Collage. We had never met before that party; I knew him of course—who doesn’t?– but I had no idea he knew me. From what I read, he was very against Hum Log (the iconic Doordarshan soap opera that made young Seema Bhargava a star) for pushing audiences back to domestic drama, when art cinema had started evolving their tastes—so I doubt he saw any episodes. Later, I asked him how he thought of casting me and he said, ‘a little bird tweeted in my ear.’ He asked Manoj (Pahwa, husband) to read too, and though he was nervous about going on stage after a long gap, Naseer rid him of those fears. He is responsible for getting us back on the stage in Mumbai. The association has lasted for fifteen years, I haven’t done too many plays for Motley, but we have done many shows of those productions. Then he and Ratna acted in my production of Bhishmotsav, and then in my film (under-production), so the bond has only strengthened over the years.

“After he had worked with me for a bit, he asked, what I was all about, what was my background, because, he said, what I was capable of could not have been taught at the National School of Drama, where did I learn? I told him, duniya ne sikhaya (the world taught me), and I learnt from the many directors I worked with.”

Seema, daughter of stage actress Saroj Bhargava, started performing in theatre and radio plays in Delhi when she was a child. “By the time I had grown up, I had worked with all the best directors in Delhi at the time, like BM Vyas, BV Karanth, Bansi Kaul, Bhanu Bharti, Rajinder Nath. I have done everything from street theatre to Ramleelas to performing at fairs like the famous Nauchandi Mela. Let me tell you, there is nothing better to shed all hichak (inhibitions) and loosen that knot actors have inside them, than performing for crowds in open-air spaces. There is chaos, kids howling, people eating chaat, and you have to reach them above the din, and have no clue how they will react. I worked with the three major repertory companies in Delhi– LTG, Shri Ram Centre and NSD. I did a series of classic plays, like Aadhe Adhure, Khamosh Adalat Jari Hai, Qaid-e-Hayat, Natsamrat, so I had learnt from every experience and developed my own style.”

She met Manoj Pahwa while working in theatre too, and they acted opposite each other in many plays with the group Sambhav. “Then, we thought we are comfortable together on stage, why not think about a life together too? It’s been 31 years now.”

When Seema and Manoj Pahwa came to Mumbai with a whole body of theatre and television work behind them, they wanted to do theatre, but had no idea how to go about it. “Everybody has their own group and are not too welcoming to outsiders. We did not have the resources to start our own group. Manoj got fed-up and took up films. I was lucky to have gotten an opportunity to work with Motley, which, of course I jumped at. Naseer had tried out other actresses, but was not happy with them. So it’s just happenstance that I was looking for a group and he was looking for an actress. Naseeruddin Shah is an institution by himself, and what I learnt from him I could not have in any drama school. Often, you have to forget about what you have done before. For instance, in Aurat Aurat Aurat, in which I played the older Ismat Chughtai, he told me to be absolutely still, not to move my hands or neck. Now, we believe that theatre acting is a bit louder than film or television acting, because we have to reach the audience in the last row. But from the stillness in that play I realized, there is no great need of gesturing or posturing; the audience is looking at the actor anyway, and they are aware of every blink of the eye. When what you are saying is so strong, it will reach the audience, never mind how far they may be seated.” 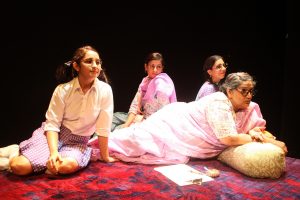 When the Pahwa children, Manukriti and Mayank returned after studying drama from MS University Baroda, the family formed their group Kopal. “With them, we had the pillars with which to build a group. Mayank is also a writer, and he needed a platform too.”  Kopal took off with the memorable Saag Meat, based on a powerful Bhisham Sahni story about the class divide, in which Seema actually cooks the dish on stage, and it is served to audiences after the show.

“Actor often say, either give us dialogue or a task on stage, we can’t do both. If we are performing some chore stage, we cannot concentrate on the lines. I could not understand why that was a problem, so I took up this challenge to see how it works. In the Eighties, back in Delhi, Devendra Raj Ankur had started Kahaani Ka Rangmanch—performances of stories on stage. We had done quite a few stories by Bhisham Sahni. He was alive then, and came to watch some of them too.  Ankur had done Saag Meat, with me sitting on a wheelchair and talking to an invisible woman. I wanted to revive the story, but doing it the same way was boring. So I hit upon the idea of the woman cooking on stage; I had to express her emotions and her pain, and also cook a dish that was edible—not just pretend cooking. If I could balance it, that would be a great exercise for me. I am pleased at the success of the play—I must have done over 75 shows.”

The Pahwas’ theatre work was neglected for a while, when both of them got busy with films, fitting right into the spate of realistic films set in small town India. “But now we are planning a show in November. Even though I know it is difficult to recover costs and survive only on theatre. How do we pay actors if there is no money coming in? Then we can’t complain if actors go off to do television.”

Seema says she got tired of playing the same kind of roles in films, and wrote a script, Ramprasad Ki Tehrvi, ”in which she “got greedy” and gave herself a great role of Amma. “Filmmakers keep giving me the same kind of mother roles and then will say that is all she can do. But they won’t offer me anything different to do either!  So I went with the script to Rajat Kapoor and Sharat Katariya to direct it, but both said, direct it yourself, I had directed for the stage after all. Naseer advised me to turn it into a play, because films ruin everything. Then he said, ‘if you really wish to, go ahead and make the film, what is the worst that can happen? You will fail. I made a mistake, you make one too.’ Anyway, Drishyam produced it, I cast 27 actors mostly from the stage and we had fun doing it. It will be released in October.”

It so happens, that Seema’s brother Abhay Bhargava is an actor too, so is her nephew, Mohammad Zeeshan Ayyub and his wife Rasika Agashe. “We are carrying my mother’s legacy forward. We are all doing theatre for ourselves. If we get better known in films, it will help pull in an audience for our plays. Then we can think of doing bigger productions. Giving up theatre is not an option… theatre to karna hi hai.”

(This piece first appeared in The Hindu Friday Review on August 30, 2019)