Squirrel On The Go:

Shaili Sathyu and her Gillo Team is getting ready to get on to their Natak Bus and travelling to parts of Maharashtra—the group’s second such tour, after Karnataka last year. This time, 23 shows and 11 workshops are planned at with schools and NGOs in places like Pune and villages around Kamshet – Uksan, Kambre, Govitri and Nane, aimed at reaching 3200 children and adults.

(For those who want to support the tour, Gillo’s Ketto fundraiser can be reached at: https://www.ketto.org/gillo-on-the-go-2019-20)

Shaili leads Gillo, one of the few companies in India that specialises in theatre for children. It was her dream to travel with her repertory all over the country. To begin with, they hired a bus and toured Karnataka, covering six places in 15 days, performing and conducting workshops. “For years, I was inspired by Ninasam (the legendary KV Subanna’s cultural centre in Heggodu, Karnataka) touring with their Tirugata repertory; the groups in Maharashtra, Assam, Manipur, getting into a bus and touring—the romance of it!  We planned for a year, raised money through crowdfunding, talked to local partners to host us. The idea was to get exposure to a new audience in a different part of the country and also see the country. Performing in Mumbai can get monotonous. There is a kind of self growth in understanding your country through a different medium, both as an artiste and as a person.”

The tour was as fulfilling as it was tiring; they interacted with children, teachers and theatre and local artists, staying in very basic accommodation, on mattresses wherever there was space. Shaili intends going back to the same state for three years to see the initiative take root, and then plan similar tours in other states. She wants Gillo to collaborate with groups working with children in other places, and perform in local languages. The Gilehri or squirrel was chosen as a mascot, because it is found all over the country, and Gillo intends to go everywhere the squirrel is found.

Recently, Shaili started working on theatre for toddlers, which, she says, comes with a bunch of challenges of its own. She thought it was too “extreme a space to get into” till Gillo co-hosted with ASSITEJ ( the International Association of Theatre for Children and Young People) and attended a master class for early years, by the Italian theatre maker Roberto Frabetti. It led to the production of Gillo’s first production for toddlers, Chidiya Udd, that took them to Bologna, where they got to see a lot more plays meant for little children. The 30-minute silent play has been performed in a regular venue, an orphanage and more shows are planned at a crèche. 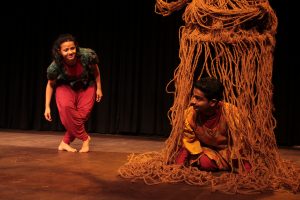 “I discovered that a play for very small children cannot have a story; they respond to movement and situations. It is also important to get them to the performance venue a little early, after they have been fed and taken to the loo, so that they don’t get cranky and they get familiar with the space and the other faces. Toddlers can get distracted easily and if one cries, a whole lot will start crying too. Chidiya Udd is about two actors and their six encounters with birds. We know how the kids are responding by their expressions. We also know how much they have absorbed when we invite them to interact with the actors and materials on stage, because they tend to imitate. In the play, the actors give grain to the birds to eat, and we had little containers of grain and cloth birds, for kids to play with. It was heart-breaking to see the kids from the orphanage gather up the grain and put it back in the baskets; at that age they have been taught not to waste food, while kids from families happily threw the grains about.  It was an eye-opener for me, that those orphanage kids were so regimented that they did not have a sense of abandon.”

She believes that if children are exposed to cultural experiences as a part of their lives, on a continuous basis, throughout their childhood, “it has a definite impact on their inter-personal skills, and sensitizes them to other people, situations, animals and even plants. But it only has an impact if it is not done with a focus on cheap entertainment.  Theatre should stimulate them to think, and make them feel something beyond laughter and slapstick.”

Shaili’s love for theatre is inherited—her parents MS Sathyu and Shama Zaidi have always been active in theatre and cinema, and she grew up around plays by the Indian People’s Theatre Association. She was automatically pulled in, learning along the way in the “apprentice mode.” She wanted to write stories for children, but eventually decided to work with theatre.  “At first, I conducted workshops at home, basically experimenting with children I knew. Then I started conducting workshops for children at Prithvi Theatre. Directing plays for kids was not on my mind, but when Ramesh Talwar and Sulbha Arya of IPTA asked me to direct Barso Ram Dhadake Se, I did this play with 26 actors, and kept wondering what I had got myself into!  But it was a great learning experience. Then, in 2009, I founded Gillo, formalizing my idea of wanting to focus on children. Also, I had turned 30, and it was about time I stopped doing various things, like designing for other productions, and decided to combine my experience with theatre and interest in stories for children. And all the plays we have done, are based on Indian stories.

“It was when I attended a director’s workshop in Germany, and was exposed to so much theatre for children, I realized that it is possible to do it in India as well.  There were a couple of groups on Delhi, but at least in Mumbai, there was nobody working solely with children.”

Years later, she is still the only one, even though the funding is not easy to come by. “There has to be a balance between performances and workshops,” she says, “It’s hard to survive just on performances, because like theatre for adults, there are no corporate shows. Some schools have shows, but their budgets are not that high just to get students to watch a play. In terms of creative satisfaction, I have gained a lot. I have no regrets make theatre for kids the sole focus of my work.”

Meanwhile, her album with photos of squirrels from all the places Gillo has been to, is getting thicker.

(This is a slightly modified version of the piece that appeared in The Hindu on May 18, 2018)