Sona Mohapatra was furious because she found that female singers were not being invited to perform at music festivals, the excuse being there aren’t any. She created the hashtag #IExist and contacted all the female singers she knew to join in, and let organizers know that they exist. To her surprise not a single one responded. But she continues to speak out against sexism in any form, whether it is fighting bigots who attack her for dressing inappropriately when singing a Sufi song Tori Surat or a halter top while singing a Mira bhajan, writing to the Indian Institute of Technology (IIT), Mumbai that invited her to perform at its festival, Mood Indigo, provided she brought along male composer (and her husband) Ram Sampath, or taking on Vishal Dadlani for his condescending attitude towards female performers. When cornered, quite predictably, Dadlani tells Sona to start her own music festival, but still does not offer women headlining acts in the festival he is involved with. 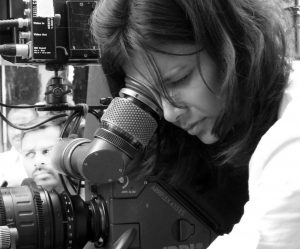 Mohapatra has produced and starred in a documentary called Shut Up Sona, shot and directed by Deepti Gupta (also co-producer with Ram Sampath), that raises a lot of the issues that she speaks out against. (Incidentally Gupta is one of a handful of female cinematographers in the film industry). In the film she talks about the marginalisation of female singer, specifically mentioning the NH7 Weekender event, which, in 2017 had just five women performing out the fifty that took the stage. Composers Vishal Bhardwaj and Ram Sampath, performing at the festival for the first time, were allotted 90 minutes on the main stage, while the popular Nooran Sisters, who can “blow all these boys out of the park,”  were given only 30 minutes at a smaller stage. “They are qawwals,” says Mohapatra, “they take 30 minutes to warm up,”

The filmmaker followed her subject for three years, captured the ebullience of her concerts, her boisterous sense of humour, and also quieter moments at home with Sampath who tries to tell her to think twice before she tweets, and in the pursuit of her activism, not to forget that she is a performer first. She visits her alma mater in Orissa, where she is clearly a figure of inspiration, as well as an Amir Khusro shrine, where the male qawwals tell her that women are not allowed to make offerings or perform there. But very gently, while talking to them, she joins them in song, a moment that must have been spiritually uplifting for the singer, and perhaps, eye-opening for the men. Breaking the shackles of deep-rooted patriarchy can happen one link at a time.

And Sona won’t shut up. Several incidents are not part of the film. She slammed Salman Khan for his casual comment on rape, when he compared his battered condition during Sultan‘s wrestling shoot with that of a raped woman. Mohapatra she was viciously trolled and given death threats by the star’s fans. Later she tweeted about his mean-spirited comment about Priyanka Chopra, who had left his film, Bharat, calling him the poster child of toxic masculinity. She tweeted, “Priyanka Chopra has better things to do in life, real men to hang out with & more importantly, girls to inspire with her journey.”

As one of the leaders of the Indian #MeToo movement, she called out Anu Malik for sexual harassment, and the composer was dropped as a judge for the reality show Indian Idol, and then, reinstated soon enough. She has written an open letter to Sony Entertainment Television for getting back “the sexual predator.”  For her courage, Mohapatra was dropped as a judge on Saregama, ostensibly for giving the rival show publicity.

She pulled up Sachin Tenduklar for endorsing the new edition of Indian Idol with Anu Malik. “Dear Sachin,” she tweeted, “Are you aware of all the @IndiaMeToo stories of multiple women, some minors who came forward in the public domain about Anu Malik, the judge in the same Indian Idol show last year, including their own ex-producer? Does their trauma not matter or touch anyone?”

The response to a woman refusing to be silenced or bullied, are the usual threats of rape, allegations of doing it all for publicity, and a male singer allegedly telling her husband to control her. There is also the male music establishment that she calls a “boy’s club” hurting an assertive woman like her at a professional level, by simply sidelining her.

At the end of the film, there is startling information, in 2018, IIT Mumbai had one female headliner out of 15 performers. Bollywood released 347 songs in 2018, of which there were only 49 female solos. NH7 2019 did have more female singers, but Sona Mohapatra has not been invited.

There are so many ways of silencing the voices of forthright women. Which is all the more reason for women not to shut up! If enough voices join the chorus, a hearing impaired patriarchy will be forced to listen.

Darkness Behind The Rainbow -Feministaah

The Sisterhood Of Courage – Feminstaah

Subscribe To My Newsletter For New Posts And Stay Updated!