Mumbai has an overactive theatre scene, but most groups suffer from a severe shortage of funding, which then results in working around available—and often inadequate– resources.

Which is why, when Aadyam was introduced, by the Aditya Birla Group, in 2015, it was a boon to those theatre groups that had the ideas and the people, but lacked the financial backing to bring their productions to the stage.

Aadyam gave the projects selected all support, including lavish marketing, for nine shows, after which the groups could run the shows on their own. For those who had the ability and ambition to run with their production, Aadyam was a great springboard.

The Aadyam mandate for the selection of plays was that they have the content and production values to attract bigger, and newer audiences. So, the shows on stage, were accompanied by imaginative touches in the foyer—décor to match the milieu of the play, live music, food, photo booths, games prizes, discounts at restaurants in the vicinity, all of which enhanced the theatergoing experience.

Over the last few years, the productions have been a mixed bag, some ran successfully, some scaled down to be able to tour and some simply packed up. The genres have included comedy, musicals, classics, new writing and, one year, two experimental plays for smaller venues.

In the fifth season, the opening play is A Few Good Men, written by American playwright and screenwriter, Aaron Sorkin (which was turned into a Hollywood movie in 1992 by Rob Reiner, with Jack Nicholson, Tom Cruise and Demo Moore heading the cast) and directed by Nadir Khan—a tense legal drama set against a military backdrop. 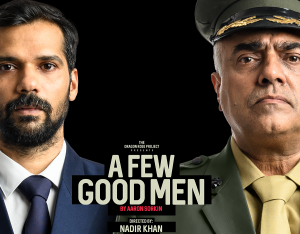 Shernaz Patel, who has been Artistic Director for two years, says that it is not imperative for the productions to be Indian; this year, of the four plays picked, two in English and two in Hindi, only one is original. “Aadyam is really looking for big shows for a proscenium stage, which would be appreciated by large audiences. And far as possible, the genres are mixed, and there is something exciting that will allow it to run for nine shows.  Last year we had had a nice mix, something completely original like Hello Farmaish, giving an opportunity to a younger person to try and see how the proscenium space works, to a massive musical like #SingIndiaSingh—so we have had a range.”

Shernaz has been associated with theatre for several years, as an actress as well as a part of the production company Rage, so she understands things from both sides of the fence—as producer-performer and curator-administrator. “We get a lot of entries, a lot of people pitch shows, I put it out to the entire community. We are very clear that we are looking primarily for big shows. I was hoping we would do some of the smaller shows as well, but didn’t get the go-ahead. In my ideal world I’d like to be able do both, because  you can try something more out of the box, and push the envelope further. Some people in Mumbai just want to do the small shows.”

The building block for a good production is a story, which is what she looks for first.  “If there was fabulous writing coming out of India for the commercial stage, then we would not have to look anywhere else, but most of the writing we have is experimental in nature.  The absolute blockbuster kind of shows which we have in Marathi, we don’t seem to have in other languages.”

In spite of her push to groups to explore options, she finds that very few are up for the challenge. “My mandate to everybody is do anything, do a musical, if not in a proscenium, we can take a maidan and built a tent, do an immersive show, but some groups are very clear that they don’t want to take their shows big.”

For those who get selected for the Aadyam season, they do not have to cut corners. “The bottom line is the audience’s perspective,” she says, “As for the benefit for the community,  Aadyam is doing that by proving better resources to dream, which will always be there. But with the support given by Aadyam, a group does not have to be afraid of having large cast plays and superior productions. They don’t have to bring clothes from home, they can design costumes with a proper colour palate. They can plan sets. Otherwise who is giving you money to do theatre? Mr Kumar Mangalam Birla takes such interest himself, meets people, comes to shows. But we don’t interfere with the creation of the work, we are facilitators. We don’t want to be seen as financiers either, then you are only creating a show for Aadyam. We say, do you have a play you are working on already for which you’d like support? Then we will be happy to help in any way. Being a theatre person, I contribute in any department that they need help for.  As a friend can give advice and support.”

With an eye on developing “theatre addicts” of the future, Shernaz is putting together a package for schools. “Students will be given a background of the play, we will do workshops; they will get to meet the team. If they want to do reviews of the plays, we will guide them. The wall between the performer and audience should be broken. Some schools have shown interest, so I hope that happens.  I would like to do more in terms of development for the community, because that’s where it all begins. There is a need to do more development work.”

If there is any lacuna in the effort undertaken by Aadyam, Shernaz says, “Directors! We don’t have enough, and most have very limited vision. I really want to do a proper structured training programme for directors. Where is the idea? We need ideas and directors who are equipped to embrace all kinds of spaces, whether a library or a large auditorium. At the same time, because there is so much devising work happening, where are the text people?  Who can work with an exciting text and bring it to life?  There should have been ten direction courses in Mumbai by now.  And designers; the good ones get sucked into films and ad films.”

Of the 21 plays performed under the Aadyam banner so far, not all have succeeded. “That can happen in any creative process,” she says. “Some work resonates more than others. But, what Aadyam set out do so, it is on the right path. Slow and steady, the audience base is growing.”

(This piece first appeared in The Hindu Friday Review on July 5, 2019)