Best-selling author Jojo Moyes’s historical novel The Giver Of Stars is a fictional account of this wonderful programme that took books to the people in remote mountain areas of Kentucky, and how this changed the lives of both the givers and the receivers of books.

Since the librarians were all women (who were paid a small fee of $28, barely enough to compensate for their trouble), Moyes was able to create a cast of brilliant female characters, who form an unlikely sisterhood to support one another, and others who need help. There was another novel on the same subject, The Book Woman of Troublesome Creek by Kim Michele Richardson (kicking up a plagiarism row), as well a few non-fiction accounts of this project, which deserves admiration, belated though it may be.

What was the real Pack Horse Library project all about? In a piece by Anika Burgess in atlasobscura.com, “They were known as the “book women.” They would saddle up, usually at dawn, to pick their way along snowy hillsides and through muddy creeks with a simple goal: to deliver reading material to Kentucky’s isolated mountain communities. The Pack Horse Library initiative was part of President Franklin Roosevelt’s Works Progress Administration (WPA), created to help lift America out of the Great Depression, during which, by 1933, unemployment had risen to 40 percent in Appalachia.  Roving horseback libraries weren’t entirely new to Kentucky, but this initiative was an opportunity to boost both employment and literacy at the same time…The book women rode 100 to 120 miles a week, on their own horses or mules, along designated routes, regardless of the weather. If the destination was too remote even for horses, they dismounted and went on foot. In most cases, they were recruited locally.”

The books and magazines were donated, generous locals gifted land to build sheds and shelves to house the books; when they were worn out, the enterprising librarians made scrapbooks out of the pages. The project ran from 1935 to 1943 and made a huge difference to the lives of the poor with no access to books or learning. The librarians, by reading to the illiterate and forming a support system for the women and children, made their hardscrabble existence a little easier. 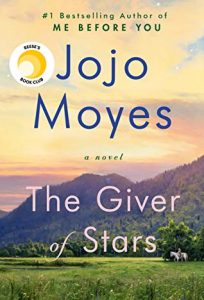 The protagonist of The Giver Of Stars is a young Englishwoman, Alice, who marries the handsome American Bennett Van Cleve, and moves to his county, only to find herself trapped in a loveless marriage, and doors closed on her at her parents’ home.

When a rich woman, Mrs Brady, aims to start a Pack Horse Library in the Depression-hit town of Baileyville, Alice volunteers to join the team, since very few women want to take on the arduous job that requires riding into treacherous territory from dawn to sundown all year round. The leader of the four-member group is the fiery Margery O’Hare, who has suffered such a tough childhood under an alcoholic father, that she is afraid of nothing and nobody. Margery lives by herself and is in a relationship with the kindly Sven Gustavsson, but resolutely refuses to marry him, insisting that she wants to be a free woman. The shed for the library is provided by the helpful horse trainer Fred Guisler, who immediately falls in love with Alice, but can’t express it because she is married.

A subplot involves Alice’s evil father-in-law, who runs the region’s coal mines, and exploits the poor miners who work for him. Enraged at Margery for creating awareness among the people about his underhand ways, Van Cleve tries hard to shut down the library and prevent Alice from working there. He is even more enraged when Margery employs a black woman, Sophia Kensworth, to catalogue and mend the books.

For the desperately unhappy Alice, trying to be accepted in the community (they all make fun of her posh British accent!), the library is a lifeline; for Mrs Brady’s handicapped daughter, Izzy, it is a means of discovering herself and for Beth Pinker, it is an escape from her unpleasant family. Margery is the backbone of the project, the one who gives the women courage and a voice to deal with the opponents, who are afraid that their women and children will be corrupted by books.

But the light of learning never hurt anyone, as a distraught widower with little daughters discovers; books help a young woman with a terminally ill husband endure her misery, and bring joy to the lives of two lonely old women. As in real life, the librarians in the book too, do not let snow, rain, slush, heat, illness or family battles stop them; they treat their work almost as a sacred duty. The novel begins with an attack on Margery, but otherwise, there is no indication that the women suffered sexual harassment when they were out in deserted areas. The times were perhaps different, the people kinder and more god-fearing.

The story is extremely uplifting and inspiring. Later, in the US, horses were replaced by automobiles, and these travelling libraries survived a little longer. However, the love of reading and knowledge (as opposed to information, of which there is plenty) still needs to be inculcated, and a country likes ours needs such a library project. Television, mobile phones and the internet have reached where books have not, but technology has not yet succeeded in dispelling ignorance, superstition and hate.  Maybe the reins of progressive thought need to handed over to modern-day Book Women.

(This piece first appeared in The Free Press Journal on January 1, 2020)