As Trishla Patel sets to open her new production of Catch 22,  revisiting an interview with her last year.

Trishla Patel arrives from the rehearsal of the Naseeruddin Shah-directed Aurat Aurat Aurat, in which she is one of the bunch of actresses who plays writer Ismat Chughtai and also characters from her stories.

“A very big challenge doing this play was speaking Urdu correctly. And Ismat, so liberated at that time, when she wrote what she did at the risk of literally losing everything. She broke all shackles… I really admire that woman and am so proud to be a part of this production. Naseer Sir told us not to try to act like Ismat, but just get the thought of Ismat in our minds. But he pushed me to my limit.”

Shah has been a constant influence on Patel’s career—the first professional play she did, Mahatma vs Gandhi, directed by Feroz Abbas Khan—starred Shah as Gandhi. Till then, the young woman from a family of industrialists did not know that theatre would be her future. “For the longest time, my parents thought it was a hobby.  They could not understand doing something for love, to them you either do something for the money, or don’t do it. For theatre you have to put in money out of your own pocket!  All through school, I looked forward to annual day, so that I could be on stage. If there was anything to do with acting, I was there first. I wasn’t sure I’d be an actor, but it was something I gravitated towards all the time. In college, it stopped, because I didn’t know Hindi; also I studied science so there was no time for theatre. Then I joined law college and was so bored, that I started doing theatre, and won awards. Then I met Feroz Khan and Naseer Sir, then Kay Kay (Menon)  and Dubeyji. I knew then, that I was not made for anything else. I dropped out of law college, and went on tour with Mahatma vs Gandhi.”

She did not think of training in theatre, because, she says, “At that time there wasn’t much exposure, I did not know of the existence of the National School of Drama. But I trained with Dubeyji, Naseer Sir, Sunil Sir, Mak Sir—the best teachers anybody could get. They were my gurus and I look up to them,”  she says, listing some of the best in Indian theatre—Satyadev Dubey, Naseeruddin Shah, Sunil Shanbag, Makrand Deshpande, all of who helped shape her to be the actress she is and also eventually a writer, director and producer.

After doing a mind-boggling number of plays, ten years ago, she set up her own production company Tpot under which she has directed a variety of plays, some of which she also wrote.  “I wanted to see the kind of play that I had not been seen on stage,” she explains. “so I had to make them. The only way to do it was to write, direct and produce them, I guess.”  Her husband, Vishal Capoor, a pilot, encouraged and supported her. “I trust his critical appreciation,” she says, “He is bang on most of the time, because he is like a normal audience, and can say things like “isme maza nahin aaya. Everybody is not so frank, there are too many yes people around, so I depend on him. Also on KK, Sunil Sir, Mak, who come for rehearsals and if they find something is rubbish, they tell me so.”

When she wanted to diversify from just acting to directing and producing, she asked Dubey for his opinion, and he told her to go ahead. “He said, you will be very unsuccessful in the beginning, don’t worry, eventually you will understand how it works. I learnt a lot from Dubeyji, including what not to do. He said watch a lot of plays, bad plays for sure, so you know what not to do, and good plays so that you can get jealous and learn what to do.  He also said, work hard and you will get what you want. Eventually, your ears will open and you will be able to listen; your speech will clarify and you will be understood better. What he taught was so simple, which is what made him great. He did not make acting sound complicated, he did not say observe this, get into the character, live it…he would simply say, speak clearly and the audience will understand everything. He believed less is more and I think that’s important. Even today, Naseer Sir quotes Dubeyji during rehearsals. By the time I met him he had mellowed  lot, but I got my share of shouting from Dubeji.”

With Tpot, she has produced plays for children and adults, like Kumbh Katha, Aaj Rang Hai (co-produced with Purva Naresh), Zinga Zinga Roses, Char Small, Wolf, Growing Up, Six Characters In Search Of An Author, Mayday, and more recently, two plays with significant subjects—Jannat Central about mental illness, and Exchange Student for kids, about racism and child labour. 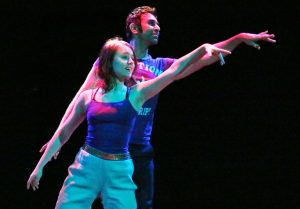 “I wrote Jannat Central because I knew people who had gone though mental issues and it all came out. I did a lot of research before I wrote it. A play about what is inside the mind is difficult, but I used dance and worked with Sandeep Soparrkar and Alesia Raut, who are so wonderful and easy to work with. There are so many people with chips on their shoulders that Sandeep was like a breath of fresh air.”

Exchange Student came out of her own experiences as an “exchangie”, her memories of going to France at the age of ten, and later, at sixteen, to Finland, where she worked on a farm. “ I saw it all firsthand, the differences between cultures, and wanted to write about it, about racism.”

She is currently working on adapting Joseph Heller’s cult book Catch 22 for the stage, and also on a short film. After gaining invaluable experience assisting her brother-in-law, the filmmaker Gyan Correa, the thought of directing films is also taking shape in her mind

When she was directed by the best in theatre, with very diverse style, how does she like to be directed. “Every actor thinks they don’t need direction, that they should be left alone to do their own thing, but that’s not correct. For me, the best way is to surrender completely. Of course,” she adds laughing,” when I direct, I expect complete surrender from my actors too. If I don’t get it, I start shouting, because I learnt from Dubeyji.”

(This piece was first published in The Hindu in December 2018)