A new book, Blue Ticket, by Sophie MacKintosh is a dystopian novel about women, which follows her Booker longlisted 2019 book, The Water Cure, set in a bleak world where masculinity is literally toxic and three sisters are hidden away  on an island supposedly for their safety.

In the new book, with distinct echoes of Margaret Atwood’s The Handmaid’s Tale (1985), when girls attain puberty, they are taken to a centre, where they have to take part in a “lottery” and pick a ticket. If they get a white ticket, they are allowed to become mothers, if they get a blue one, they are forbidden to bear children. The girls are given no choice in the matter, they have to live by what the lottery decides for them.

The girls with a blue ticket are given some basic survival tools and have to make their way past rampaging groups of men, to get to a city, where they can get an education and choose a career. With a contraceptive device placed in their bodies, they are free from the fear of pregnancy, and can indulge in as many sexual encounters as they please. The story is about Calla, who decides she wants to be a mother, and is willing to endure all the troubles this entails. She has to leave the city with the authorities pursuing her, and try to keep a step ahead of her potential captors. She meets some other women like herself, and for a short while, they find peace and safety with each other, but the male world order – with active collusion of women—cannot allow Calla to escape and break the rules.

Whenever men seize absolute power, the first thing snatched away from women is their freedom, control over their bodies and their reproductive rights. In Blue Ticket, for instance, boys are not required to go through the lottery that decides who can or cannot be a father. 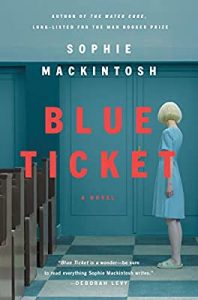 Sophie Mackintosh’s books are additions to the growing list of women’s dystopian fiction, because every time a conservative regime comes into power, women are at risk of losing their hard won autonomy.

Science fiction and fantasy is full of apocalyptic and dystopian plots but the best known book in this genre is Margaret Atwood’s The Handmaid’s Tale (also turned into a riveting TV series), which was inspired by the rise of the far right in America and the Islamic Revolution in Iran (1979), when a modern progressive society was pushed into the dark ages. The horrors that women had to endure during the Taliban regime in Afghanistan is still fresh in the memory.

In Atwood’s novel is set in the future when a democratic government in the US has been overthrown and power seized by religious bigots, who establish a totalitarian state called Gilead. Women are subjugated by having their roles strictly defined by the men who rule, and females in various categories are recognized by their colour coded garments and head covering. Some women do resist and try to escape, but most submit to their helpless fate. The story continues in a 2019 sequel, The Testaments (co-winner of the Booker, with Bernadine Evaristo’s Girl, Woman, Other), in which things have not improved much for women since the last book.

The future that is to be feared may be upon us already—unstable governments, religious fundamentalism, neo-Nazi movements, the pandemic–and every time there is a social upheaval, the worst forms of violence are inflicted on women. If access to resources is limited, it is women who will have to make the biggest sacrifices.

Bina Shah’s recently released (in India) book, Before She Sleeps, is about the government in a country in the Middle East using “terror and technological surveillance to control its people, and women must take multiple husbands to have children as quickly as possible. Yet there are women who resist, women who live in an underground collective and refuse to be part of the system. Secretly protected by the highest echelons of power, they emerge only at night, to provide to the rich and elite of Green City a type of commodity that nobody can buy: intimacy without sex. As it turns out, not even the most influential men can shield them from discovery and the dangers of ruthless punishment. This dystopian novel from one of Pakistan’s most talented writers is a modern day parable. It takes the patriarchal practices of female seclusion, gender selection and control over women’s bodies, and recasts them to imagine a terrifying world of post-religious authoritarianism.”  (Synopsis courtesy Pan Macmillan).

There are many other such books like Ling Ma’s Severance Hillary Jordan’s When She Woke, Louise Erdrich’s Future Home of the Living God, Jennie Melamed’s Gather The Daughters and Christina Dalcher’s Vox to name just a few. In the last mentioned, the government punishes women for speaking more than a hundred words per day—an allegory about silencing women’s voices.

Naomi Alderman’s 2016 novel The Power, portrayed a world in which women are able to send out electrical currents through their bodies, thus giving them freedom from forced or unwanted sex. This transfer of power to women topples established male supremacy and leads to violence. This novel also cautions against women who are capable of misusing their power, just like men have done down the ages.

Cody Delistraty writing in thevulture.com quotes Leni Zumas, author of Red Clocks about abortion being outlawed in America, in which she says, “Dystopia feels so solidly separate from us, whereas a paratopia is actually happening, maybe next week.”  Sophie Mackintosh said in The Guardian, “There are so many things happening at the moment, such as #MeToo and the abortion referendum. It shows that women’s bodies are still very much up for debate. I read an article that said that dystopian feminism was ‘a big trend,’ and I thought, ‘It might be a trend, but it’s also our lives.’”

These books may be works of imagination, but are scarily close to reality and women have to be eternally vigilant.

In Stephen and Owen King’s Sleeping Beauties (2017) about women who are given a choice between a utopian society without men and returning to a flawed, unequal world, a character says, “I think it might be time to erase the whole man-woman equation. Just hit delete and start over. What do you think?”   An idea whose time has come?