A one-woman stage presentation, Cast Off All Shame, by Ulka Mayur (in picture above), brought into focus the women Bhakti poets of India, who predated the feminist movement—as we know it today– by several centuries. They showed courage at a time when women did not have a voice at all, and spoke of matters, that sadly enough, still cause suffering for women. This is what Ulka has done—linked the poetry of those brave women to the issues women face today, when they are supposed to have ‘Come a long way, baby.’

The title of the play comes from a poem by Janabai, which would be startling in its candour even today and she wrote it in the 13th century. (It is also the title of a book Women Writing in India, 600 BC to the Present. Vol. 1. Edited by Susie Tharu and K. Lalita).

Translated by Vilas Sarang, it goes:

“Cast off all shame,
and sell yourself
in the marketplace;
then alone
can you hope
to reach the Lord.

Cymbals in hand,
a veena upon my shoulder,
I go about;
who dares to stop me?

The pallav of my sari
falls away (A scandal!);
yet will I enter
the crowded marketplace
without a thought.

Jani says, My Lord
I have become a slut
to reach your home.”

Janabai, the lower caste woman who worked as a servant in the household of poet-saint Namdev, was a devotee of Lord Vithoba, and even imagined that he came in female form, Vitthabai, to help her with the domestic chores she was burdened with. Many of the Bhakti poets were from the lower caste, which made their position in society even more precarious. They did not challenge social systems that kept them oppressed, but found an outlet for their pain and frustration through words addressed to their beloved deity. What they lacked in education and opportunity, they made up with imagination as well as empathy for other downtrodden people like themselves, and in their surrender to God.

Ulka picks Janabai as her ‘sutradhar’—she takes over a radio talk show when the RJ is absent and takes calls from modern-day women with age-old complaints—rejection in the marriage ‘market’ because they are dark or overweight, domestic violence, being kept out of temples during menstruation, difficulties while traveling  alone and so on. She connects these problems to the ones faced by the female Bhakti poets—at least two of them, when granted a boon, asked for their beauty to be taken away, so that they could be free of the male gaze.

Meerabai and her work is renowned all over the country; in her show, Ulka refers to the poetry of the slightly lesser-known Bhakti poets—Janabai, Akka Mahadevi, Avvaiyar, Lal Ded and Soyarabai.

Akka Mahadevi was a 12th century Kannada poet and mystic, who was a devotee of Lord Shiva.  Her beauty attracted the attention of King Kaushika, whom she married with the condition that he would not interfere with her worship of Shiva, or touch her without her consent. When the king reneged on his promise and said that she and everything she had belonged to him, she left the palace and also every material possession; she shed her clothes and went naked from then on—paintings of her show her covered with her long hair, because society must have found it difficult to accept a woman unclothed, when shame is one of the strictures that keeps her in purdah.

“People, male and female,
blush when a cloth covering their shame comes loose
When the lord of lives
lives drowned without a face
in the world, how can you be modest?
When all the world is the eye of the lord,
on looking everywhere, what can you
cover and conceal?”

Lal Ded, or Lalleshwari,  the 14th century Kashmiri mystic poet, was married at the age of 12 into a family that ill-treated her—the mother-in-law starved her by giving her a little rice over a stone, so that it looked like a mound. She became a disciple of Sidh Srikanth, renounced her marriage and her family to become a devotee of Lord Shiva.  Like Akka Mahadevi, she too wandered naked reciting her poems in praise of god.

Dance, Lalla, with nothing on
but air: Sing, Lalla,
wearing the sky.

Look at this glowing day! What clothes
could be so beautiful, or
more sacred? 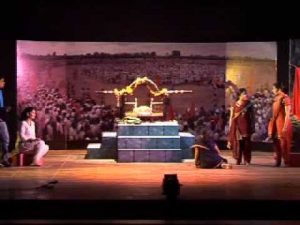 Soyarabai was the 14th century poet who was married to poet Chokhamela. Many of her poems are written in the form of ‘ovee’—the songs women sang while working on the grinding stone. She wrote boldly against the caste system, and observed, “The body only can be impure or polluted, but the soul is ever clean, pure knowledge. The body is born unclean and so how can anybody claim to be pure in body? The body has much pollution. But the pollution of the body remains in the body. The soul is untouched by it.”

Avvaiyar is the name given to a group of women who wrote spiritual poetry in Tamil, and earned the respect of a traditional society.

The thoughts of these women were revolutionary for the times they lived in, and their way of expressing them fearless– perhaps because religion was the only path to freedom open to them. The words and the spirit of these women should have permeated to the minds of Indian women, who are still lagging behind and shackled by tradition; this could be because they have not been taught in schools, and are left for women—and men—to discover for themselves.  Which is why Ulka Mayur’s play—and others like Mita Vashist’s Lad Ded and Sushama Deshpande’s Bayaa Daar Ughad about the women Bhakti poets of Maharashtra, are so important—to start and continue a discussion on women’s relentless struggle for true emancipation.

(This piece first appeared in The Free Press Journal on August 14, 2019)

Day Of The Diva – Feministaah