Danish Husain is an actor, poet, theatre director, and instrumental in reviving Dastangoi, the lost art of Urdu storytelling. After the unfortunate estrangement with his performing partner, Mahmood Farooqi, he expanded it into an umbrella of Qissebaazi, to include storytelling in other languages. His love for poetry found an outlet with the Petrification project with actor Denzil Smith, and he also went on to establish his own theatre company, Hoshruba Repertory, under which he produced plays like Chinese Coffee, Guards At The Taj and Qissa Urdu Ki Aakhiri Kitaab Ka.

“I am not thinking of myself in a slot,” he says, “I end up doing everything I like doing, which includes storytelling, poetry performances, theatrical performances, films, and serials. All of them involve some sort of artistic endeavor, at the core of which is something you find and bring out and make the meaning of it more accessible to the audience. You create a moment that people witness and get sucked into, and make that moment a part of their own selves. I do whatever leads me to that. I am not overly worried about how I will be slotted or remembered. Identity is what others perceive of you.”

Husain’s family comes from Ghazipur, in Eastern UP; “Primarily a family of litterateurs, writers, clerics, scholars, administrators,” he says, “There was no one in my family who was an entertainer or actor. I was not an exceptional student, I never had many choices, so whatever was offered to me, or shown to me, I would just follow it. I ended up doing a Masters in Economics, after which I was supposed to go to the University of West Virginia to do my Ph.D. in economics. I told my dad, I can’t do this, it doesn’t interest me. He understood and said, then take up a good job. That’s when I did my MBA and joined the banking sector. Over a period of time, I started losing interest—this career wasn’t meant for me.  Around that time I started wondering, how do I fill my life? How do I find something that keeps me involved and adds more dimensions to my personality?  I was not good at music or sports, but when I was in college, I used to enjoy imitating my professors, and I thought maybe I can do theatre and acting. But I wasn’t aware of anyone in theatre; not only had I never done theatre, but I also didn’t even follow it.”

Because of his inexperience, the National School of Drama was out, due to its precondition of an applicant’s appearance in ten productions. “I thought I would do ten productions after joining NSD!  Around that time, in 1998, Barry John had become very big, because of his students Shah Rukh (Khan) and Manoj (Bajpayee).  So I did a three-month workshop with him, and after that, I asked, what next? He said go out, give auditions. I wanted to work with him, so three months later, when his company, Theatre Action Group, was doing Tendulkar’s Khamosh! Adalat Jaari Hai, I auditioned for it and got cast as Ponkshe. That was my first acting assignment, in May 1999, so it’s been almost twenty years since I stepped on stage.”

His lack of formal training did not hold him back, however, “Whatever acting and direction I picked up, it was on the job—I just keenly observed my directors and that’s how I acquired my knowledge and that is the reason it took me thirteen years to direct a play. I was lucky that in a very short period of time, I got to work with some of the best directors in Delhi. Wherever I performed, somebody would notice me and invite me to work in their play. I acted with Rajinder Nath, Joy Michael and Sabina Mehta Jaitly, MS Sathyu, MK Raina, and finally Habib Tanvir and learned immensely from them, their earthy wisdom and acute observation. These people were not just about theatre, they were well-versed in a lot of things—literature, poetry, history, geopolitics, sociology, and anthropology So just by hanging out with these people, there was so much to learn.

“In Delhi, plays did not run for too many shows, it’s only when I got into Dastangoi, and we kept on doing it year after year running into thousands of shows, I realized that this is the way it works, a production just continues, Then I decided to shift to Mumbai, and I thought my strategy would be that while I produced and directed my own plays for my own personal growth and learning, every year, I would go to directors that I really wanted to work with and learn from, and I would act in their productions. I think it has been really beneficial for me, I observed different styles of direction, what skills they bring in, what is lacking in me that I can pick from them. I have been able to act with Naseeruddin Shah, Sunil Shanbag, Imran Rasheed, Purva Naresh Saurabh Shukla, and it has been a great learning experience.”

Husain started his directing stint with Samuel Beckett’s Krapp’s Last Tape, “When I felt I had confidence enough and understood the medium. When you are uninitiated, when you have not gone to an institution, it’s like landing up at a big wedding and not knowing who’s who or what’s what. So you just sit there and observe and try to figure out the hierarchy and the politics… nobody is giving you a guided tour. So that’s what I was doing for thirteen years, trying to understand what theatre is. When I got in, I understood, it’s not as simple as lighting up space or creating some background score or blocking; beyond the aesthetic sense, there was a deeper meaning to it. Just getting a few actors together is not going to help you. Only when I was sure that I could tell my stories through this medium, did I decide to direct.”

He admits that his extensive work with Dastangoi strengthened his relationship with the text. “How to imbibe the text so that you completely personify or embody it, so that the viewer cannot see any distinction between the text and the actor. The moment the audience realizes that your text is different from your body, the spell breaks. When I decided to produce and direct, I veered towards text-based performances, because that was my strength. I would like to learn more about physical theatre and include it in my productions. But, most of the answers we are seeking are within the text. Most actors remain on the surface with the text, they memorize it and speak it, but it’s not really that. You need to dive down and go below the surface.”

Back in 2001, when he was still a banker, Husain participated in a reality TV show that was hosted by Vrajesh Hirjee. “I had no clue then, that it would become a lifelong friendship and that one day I would actually leave my job and become a part of the industry that he belongs to. When I resigned he was one of the first people I told. He was surprised but welcomed the decision. Then life moved on. And at some stage, I decided to open a theatre company, and he said I want to do a play with you. I wanted to do Chinese Coffee, I had a date and a venue, and a few weeks later, we were on stage. The play (about a writer and his neurotic friend) was well-received. When I moved to Mumbai, we decided to carry on with our collaboration and that’s how Guards At The Taj happened. And it turned out to be a success too.” 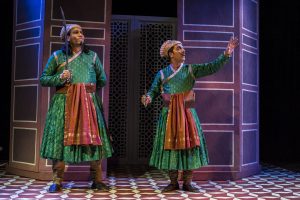 Guards At The Taj

Collaboration is a word Husain uses a lot because so much of his work is collaborative. “In Mumbai, I found a mushrooming of open mics, and it was about a lot of people reading their own work, which was not so great. So I felt, there is also a place to read classic poetry, and there is an audience for it. Poetry was part of the spoken culture of our country, in the form of mushairas and Kavi sammelans. But these now belong to a different age, and the way our urban centers have grown, they are not really the places people go to. Now it’s more about open mics and slam poetry. So I thought of performing Indian English poetry. When I spoke to Denzil, he loved the idea, then we included a musician and that’s how the ensemble developed.

“Vidya Shah (singer) asked me to collaborate on a production about Begum Akhtar, that involved storytelling and live music. I found this format very conducive to telling stories about great musicians.  It has been a very rewarding experience.”

(This piece first appeared in The Hindu Friday Review on April 19, 2019)