This happens quite often. A middle-aged woman, say aged 50, is standing in a queue. A man will casually saunter ahead of her. She will either not protest, or if she does, he will glare at her, and snap, “Haan to jao na aage (contemptuous pause), aunty!” As if she was somehow in the wrong by speaking up.  Aunty never used to be such a diminishing word for women as it has become now.

In shops and restaurants, older women will be ignored, while the salesmen and servers smile flirtatiously at young women as they take their orders. In Cecilia Ahern’s bizarre and surreal book, Roar, the disappearing woman is just one of the thirty stories of the self-esteem-destroying problems females face on a daily basis. Six of the stories have been converted into a wonderful series by Nicole Kidman’s production company (streaming on Apple TV).

The story of the vanishing middle-aged woman is not part of the first season, but it is one every woman over 40 would relate to. A 58-year-old finds that she literally starts fading away, and in spite of speaking loudly, stomping as she walks, or wearing bright clothes, people just stop seeing her.

Eventually, she seeks the help of Professor Elizabeth Montgomery, who teaches women how to reappear. The professor tells the woman that she partly to blame for her predicament. “You can share it with society. I blame the adulation and sexualization of young women. I blame the focus on beauty and appearance, the pressure to conform to others’ expectations in a way that men are not required to. I have studied and written about this extensively; as women age, they are written out of the world, no longer visible on television or film, in fashion magazines, and only ever on daytime TV to advertise the breakdown of bodily functions and ailments, or promote potions and lotions to help battle ageing as though it were something that must be fought. Sound familiar?” The woman nods. She continues: “Older women are represented on television as envious witches who spoil the prospects of the man or younger woman, or as humans who are reactive to others, powerless to direct their own lives; moreover, once they reach fifty-five, their television demographic ceases to exist. It is as if they are not here. Confronted with this, I have discovered women can internalize these “realities”. My teachings have been disparaged as feminist rants but I am not ranting, I am merely observing.”

The professor has also observed, and it is startlingly true, that women stop seeing older women too. “If we don’t see each other, if we don’t see ourselves, how can we expect anybody else to? Society told you that you weren’t important, that you didn’t exist, and you listened. You let the message seep into your pores, eat you from the inside out. You told yourself you weren’t important, and you believed yourself.”

Her advice is, of course, easier offered than achieved, that women should believe that they are “important, needed, relevant, useful, valid and sexy.”

In the series, the first episode is hilarious. A little girl is told by her mother that she’d rather be beautiful than smart. Pushed into beauty contests as a child, she grows up to be a model, is wooed by a very rich man and moves in with him. He puts up a shelf in his living room, and asks her to sit on it, like a trophy. He places his desk facing her, so that every time he looks up, he sees her, posing in glamorous outfits, jewellery and make-up. He buys her extravagant gifts and shows her off at parties.

Eventually, he moves his desk to face away from her, and then out of the room altogether, leaving her fuming. It takes her a great deal of courage to jump off the shelf and go out—she is so thrilled that she dances all over the place. But the comfort of the shelf beckons again only this time she perches on her own shelf— as if she is nothing if she is not on display.

In another insightful episode, a woman with a successful career, goes back to work after giving birth to her second child. A male colleague has been eyeing her position, and to fit in with the ‘boys’ she has to leave her kids behind and travel, drink with her team and work late. She is one of the lucky ones who has a stay-at-home husband caring for the kids, but her daughter is resentful of what she sees as her mother’s willful neglect. The woman finds inexplicable bite marks appearing on her skin, because she is being eaten up with guilt from within.

Nicole Kidman herself plays a woman whose mother suffers from dementia, so she starts eating photographs from an old album, as if to hold in memories, and perhaps, keep ageing at bay. 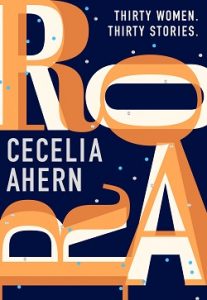 Ahern’s stories, and the eight episodes of the series, are manifestations of the casual sexism women have to endure, in the house or outside. Like a successful Black writer, whose book is being optioned in Hollywood. The white male studio executives have, without her consent, decided to turn her memoir into a virtual reality project; when she starts asking questions, they refuse to see or hear her. As it is, white saleswomen allow white women to elbow her out of line, cabs ignore her, cars almost run her over, and hotel computer cameras do not register her image —  a Black woman is invisible.

A young woman is murdered and her body is found in a state of partial undress—the male detectives make assumptions about her life, while her ghost hovers around getting agitated as they talk about her being a prostitute, junkie, and friendless loser.

A thirty-something single woman is constantly nagged by her married sister to find herself a man. She is befriended by a talking duck, who at first says all the right things, but after he moves into her home, turns out to be as passive-aggressive as a conventional husband.

In the book, a woman is swallowed up the floor, another unravels like a piece of string, yet another melts into a puddle—the visual effects teams will have fun with these images when the stories are filmed.

The experiences of Ahern’s women are quite common, but hardly ever talked about because they seem mundane in the larger scheme of things, or the women themselves are afraid of making a fuss. By using this style of magic realism, Ahern not just shines a light on these issues, but also makes the stories inspiring and empowering. Women had better get used to the idea of roaring to be heard.

The Myth Of Marilyn Monroe – Feministaah