At a coffee shop in the heart of the showbiz district of Mumbai, a young man dives at Geetanjali Kulkarni’s feet, murmuring how big a fan he is of her work. Startled, a mix of amusement and embarrassment on her face, she waits till he leaves and says, “This doesn’t happen all the time!”

Over the last two decades or so, Geetanjali’s plays have won her accolades, and her films—whether it was Court or the more recent Photograph—have got her talent noticed.  Although, when she went to the National School of Drama (NSD), all she wanted to do the kind of Marathi commercial plays she had grown up watching.

“I grew up in IIT, Powai (a suburb in east Mumbai), my mother used to work there. Our colony was full of Maharashtrians, every Ganpati we used to do plays, skits and dance. Then I went to Ruia College, where the drama society was very active. I won a whole lot of mono acting competitions. As a child, I used to love going to the theatre. The whole atmosphere, the curtains parting, the mogra smell, the vada pao… I loved all that.  A major impact on my life was also TV–Doordarshan. I watched a lot of films with actors like Naseeruddin Shah, Shabana Azmi, Pankaj Kapur, Smita Patil, because art films used to be screened on Doordarshan. I was not a very good student, and I knew by the time I was in the tenth standard, that I would do something different. I learnt Japanese when I was in college, then a course in travel and tourism. I was finding paths for myself. Acting came naturally to me. I went to NSD because I didn’t want to study, I thought acting is laughing and crying, I could do it easily, what’s the big deal? I had no idea how much we had to study.”

She calls her years at the NSD a rebirth. “I became a different person altogether–the teachers I got at NSD, the way the subjects were taught, it made a big impact. Even when you are just walking down a corridor, a teacher would say, wear the dupatta this way, and walk like a queen. The classmates you stay with for three years, come from all over the country.  In Mumbai what would I have been exposed to? Typical Marathi commercial, or at the most experimental theatre. But people from other states, have a different approach to acting, that I had never seen.  Swanand (Kirkire) was my classmate, he is from a classical music background.  Because of him, I realized for the first time that I could sing. I may not have got the nuskha (formula) to become a good actor, but I learnt a way of living. That was more important.  I didn’t realise it then, but twenty years later, it is still with me.”

She also met Atul Kulkarni at NSD, her senior at the Institute, and later her husband. “He was eight years older than me and an experienced actor. Everybody seemed to be in awe of him, his talent and his personality. Strangely, we have never worked together. Now I am not scared of acting opposite him, but it never happened.”

On her return to Mumbai, Geetanjali started doing theatre, but it was the work she did with playwright-director Paresh Mokashi was another eye-opening experience. “The first play I did in Mumbai was an experimental play directed by Girish Patke, based on the work of Vasant Abaji Dahake. But Paresh’s plays Sangeet Debuchya Muli, Mukkam Post Bombilwadi and Sangeet Lagna Kallol were my training. I think, Paresh formed a perception of acting that I could relate to. Besides, he was a very loving person. Directors generally have a very feudal kind of attitude, back then it was worse.  As if the director is a king, and actors are his slaves.  Paresh believes in equality. He would even come early to the rehearsal venue and clean the place.

“The travelling, doing three shows a day, and the next day in another town–that kind of riyaaz  (practice) that you get by being on stage hundreds of times, that confidence, only happens in Marathi theatre. The combination of NSD and Marathi Theatre worked for me. I had realized during the NSD days that wherever I went after graduating, I would have to relearn everything.  In Mumbai I met very good people, and got recognition as an actor. So my initial days in theatre went off so well, I didn’t have to think much about what to do. I did a commercial Marathi play too, which was a hit.  But I used to feel bad doing it, because of how regressive it was. That’s when I decided that there should be some thought behind the work I do.  My failures taught me a lot too.”

From the money she got for a TV serial, the title of which she cannot remember, she produced a play called Ek Rikami Baaju (An Empty Side), on breast cancer. “I realized I need to part of a process. On that play, I worked as a driver, backstage worker, producer, actor—I did it all.  I understood why I am doing theatre.” 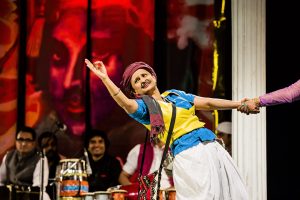 After going popular and acclaimed plays like S*x, Morality And Censorship with Sunil Shanbag, Piya Behroopiya with Atul Kumar, Haath Ka Aaya… Shoonya with Manav Kaul and Gajab Kahani with Mohit Takalkar, she realized she was most comfortable in an ensemble. “The star system I can’t fathom. After all these years, I am still skeptical or rather unsure about my craft, my tools, my working style. I am very fond of rehearsals, of process, I don’t feel bored at all of doing 200-300 shows. The shows of Piya Behroopiya I did seven years back and what I doing now, I find a big difference in myself.”

Piya Behroopiya took her all over the world, and she got an opportunity to watch a variety of plays. “I found that wherever there is good work being done, it is at the experimental level.  Sponsored, funded plays don’t have that kind of energy, maybe because they are in a comfort zone.”

Her days NSD led her to the other big project of her life—Quality Education Support Trust (QUEST) and Goshtarang.  “I feel what I have got, I must share with others.  Most people don’t get such education or training or go to such institutions,” she says “About 14 years ago, Ashwini Nimkar, one of the actresses in Sangeet Debuchya Muli, told me her uncle, Nilesh, was into education–working with an organization called Gram Mangal. Atul and I thought, we meet the same people, talk of films and theatre, we should do something different for our own mental development. We met Nilesh and started a study group in Thane (adjoining Mumbai), where people from different professions discussed issues to do with education. Nilesh became a very good friend of ours, when he said he wanted to leave Gram Mangal and start something on his own, Quest was born, with its lovely space in Wada in rural Maharashtra.”

“After three years, Nilesh said, it was about time to focus.  We picked stories which Chinmay Kelkar directed and performed them in villages. They were very well received.  We got a little funding to start Goshtrang, started a fellowship programme, worked with local actors to perform plays for children. Some unbelievable work has come out of there. And we are preparing an audience for the future. We are trying to build on this fellowship programme, there are always challenges, mostly to do with funding.”

She has directed plays for Goshtarang, is planning to direct a commercial play, and continues to do a few films that excite her. “What else does a person need? The work I like, with people who are on the same wavelength. How many people have that privilege? I have earned it.”

(This piece first appeared in The Hindu’s Friday Review on June 7, 2019)