As a tribute to I.S. Johar on his birth centenary, a look at his film Johar Mehmood in Goa):

People of a certain vintage would recall I. S. Johar’s Question Box column in Filmfare magazine, in which he gave wickedly witty answers to readers’ often daft questions.

His work as a comic actor may be remembered by some, but the films he made as writer, producer, director and lead actor, have simply not received their due. Johar’s comedy was madcap, but with a serious base, and his ideas offbeat and as individualistic as he was. It is possible that Bollywood did not warm up to him too much because he was highly educated, erudite and quirky and probably did not fit into the straight-laced traditional film industry. He believed in doing his own thing—including the then unheard of five marriages. Maybe it was because he was ahead of his times. He was also an early entrant into international cinema, and acted in films like Lawrence of Arabia and Death on the Nile.

Johar Mehmood in Goa (1965) was the first of two films the two comedians did together (the other being Johar Mehmood in Hong Kong), with the idea of forming a Bop Hope-Bing Crosby kind of team, but later Johar went at it by himself, with his Johar in Bombay, Johar in Kashmir films. He even did a spy flick called Mera Naam Johar in which he played 008.

Not exactly a masterpiece, Johar Mehmood in Goa, was a bizarre combination of comedy and a serious theme, but it was one of the handful of films set against the Liberation of Goa. It is a forgotten chapter of Indian history, the fight to free Goa from Portuguese rule. Long after the India gained independence from the British, Goa remained under the Portuguese, who finally left in 1961 after the intervention of the Indian Army.  K. A. Abbas’s Saat Hindustani (now famous for introducing Amitabh Bachchan) came in 1969; then there was Ramesh Behl’s Pukar in 1983 and Shyam Benegal’s Trikal in 1985, also set at the same time, otherwise this significant historical milestone was ignored by Bollywood.

Johar’s film had narrative tropes that were later picked up by mainstream Bollywood. Mary, a young Catholic woman, who has married in secret is turned out of from home when her soldier husband dies in battle and she finds herself pregnant.  She gives birth to twins and in despair leaves one child at the door of a Hindu Pandit (Ulhas) and the other outside the door of a Muslim Maulvi (Murad).  Both couples happen to be childless and raise the children as their own. Ram and Rahim (played by a young Raza Murad) are friends and early in the film, their religious books get exchanged, so they switch places in the exam—Ram appears in the Koran test, and Rahim in the Ramayan test and both top the class.

The kids shout anti-Portuguese rule slogans in the street and when they run from the cops, they hide behind the Mother Superior  (Sulochana) of the town’s church, who unknown to them is their birth mother. They are captured and taken to the Deputy Superintendent of Police, Peter (Surendranath), who is really their father, believed to be dead. The cop does not have the heart to whip them and lets them off the hook. One can see where Manmohan Desai got his influences from, when years later he made Amar Akbar Anthony (1977), using a lost and found plot with similar Bollywoodian secularism.

Twelve years later, Ram (Johar) and Rahim (Mehmood) have grown up to be leaders of a gang of revolutionaries and give the town’s Police Superintendent Albuquerque (Kamal Kapoor) a tough time.  They are fearless and brazen in their attacks. They phone the cops to inform them where they will strike and then turn up in disguise, first to rob a bank right under Albuquerque’s nose and then burn down his house.

The funniest bit is when they call him up and say that they will strip him. Then they go to his office as tailors and make him take his shirt off.  He stands there bare chested, looking arrogant and sneers, “Ha, let me see how they strip me.”  Then one of his men politely points out that he is indeed half naked.

When they do get caught, they get the cops transporting them in the van tapping their feet as they sing, “Yeh do deewane dil ke, chale hain dekho milke, chale hain, chale hain sasural.”  This was just one of the popular songs composed by Kalyanji-Anandji, whose assistants named in the credits were Laxmikant Pyarelal, who went on to become star composers in their own right.  Johar got to sing the patriotic song, Mera desh azaad hoke rahega, as well as the romantic Mukesh number, Dheere re chalo meri baanki hiraniya.

The two revolutionaries are rescued by their band of merry men, and plan to assassinate the visiting Portuguese governor (Sapru).  Albuquerque wants to have a procession and a function in honour of the governor, but Ram impersonates a police officer and whisks away the man’s daughter and Albuquerue’s fiancée, Rita (Sonia Sahni).

Rita is saved, but it’s not the last she sees of Ram. The revolutionaries’ informer, Pinto (Mukri) is a double agent, who tells them what the other side is up to. He brings a new recruit into the gang, and who should enter, but Simmi dressed in a white sari.  Simi Garewal was listed as Simmi in the credits—it was early in her career, this being just her fourth film. She looked lovely and svelte as the fearless, knife-throwing revolutionary, who wants to avenge the death of her family at the hands of the Portuguese. “How can we include a girl in our group?” exclaims Rahim. “What if the enemy outrages your modesty?” Simmi looks at him unblinkingly and says, “What if my modesty has already been outraged?”

The gang then dress up in dance costumes—Ram and Rahim in drag—and sing Mar gayi allah, chhod de palla.” However, the assassination attempt fails and there is a horse riding chase over the beaches. Ram and Rahim take shelter in the church again; this time, Peter and Mary come face to face, but he thinks she is a lookalike of his wife. Mary refuses to give them up, and Peter can’t arrest them from the church. The plucky Simmi has a fight scene with Albuquerque, till Rahim comes to her aid.

Mehmood got one of the craziest gags in the film. To escape from the guards posted outside the mosque, he gets a skilled Jarrah, a traditional cosmetic surgeon, to change the faces of four other men to look like him and all five dance to, Aji aisi nazar ko kya kahiye, in front of the befuddled cops. The film is replete with bizarre sequences like this. 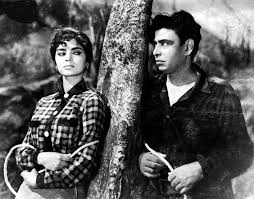 Ram manages to kidnap Rita again, and keeps her imprisoned with the help of Daku Daler Singh and his group of bandits. A short taming of the shrew or Stockholm Syndrome episode takes place, when Rita falls in love with Ram and learns to be a good Indian girl, wearing a sari and cooking local food in the forest. She gets to sing a dream sequence song, Ankhiyon ka noor hai tu, sitting at a piano, which used to be much used prop in sixties’ films.

The real Rahim is identified and put into solitary confinement and this time, against the wishes of the gang, Simmi goes to rescue him, scaling walls and silencing guards, dressed in her usual white sari. She is captured too, and gets to share her jail cell with the eternal fat lady Tun Tun,  She has just one scene in this film, in which she makes fun of herself.

Rahim escapes from hospital, dressed as a doctor this time, and along with Simmi gets out of prison in the corpse van and in the midst of all that tension, they impersonate an old couple about to celebrate their fiftieth wedding anniversary with their family, and do the twist with a bunch of perky kids to the song, Hum hain abhi jawaan. This kind of scene in which a runaway pair gets into a crowd, changes costume and does a dance number was used in hundreds of Bollywood films.

The tomfoolery has to end at some point and action begin—they all land up in a fort, including the mothers, who hijack a train– and help the Indian Army that arrives to free Goa. The patriotism of this little band is so infectious that Indians in the Portuguese army refuse to fight the Indian army. In a spirit of fun, Johar made a film on a serious subject. Later, he was one of the few filmmakers who made Jai Bangladesh (1974) about India’s role in liberating Bangladesh from Pakistan, and Nasbandi (1978), a satire on the government’s forced sterilisation drive during the Emergency (imposed by Indira Gandhi). His later films were merely shoddy, having none of the inspired lunacy of the earlier comedies—it was as if his wicked sense of humour had curdled.

Two of Johar’s children, Ambika and Arun made half-hearted forays into Bollywood without much success. His estranged wife Ramma Bans enjoyed a thriving career as a fitness guru to celebrities like Rekha.

Although he was popular in his time, Johar’x career went downhill as his films became increasingly  weird and stopped appealing to his audiences. Still, his best work stands alongside those by other directors of comedies, and his contribution to Hindi cinema should be recognised.

(This is a slightly modified version of a chapter in my book 50 Films That Deserve A New Audience, published by Hay House in 2015)

Darkness Behind The Rainbow -Feministaah