As a child, Kamlesh Mota auditioned for a school play, and expressed the intention of taking up theatre. His mother took him to the Bhangwadi Theatre in south Mumbai (a venue, now defunct, where traditional Gujarati plays were staged) and told him that she and his father used to watch plays there. She recalled a particular performance of Raja Bharthari, starring the legendary Ashraf Khan. “My mother said that after the show,  that ended at dawn, the actor came out and was mobbed by fans, who wanted to emulate the character he played and become sanyasis. And he told them that he was an ordinary person, and like them, he would be buying milk and going home. She told me that if I was able to play characters that audiences took home with them, only then should I get into theatre, otherwise there were lots of shops around where I could get a job.  Of course, I did not want to work in a shop! But what she said has remained with me.”

Over 30 years later, Kamlesh is a prolific Gujarati theatre producer, director, actor as well as Director of Programming at the Bhavan’s Kala Kendra (a thriving cultural centre); so packed is his schedule with shows, rehearsals and travel that his colleagues joke he must have found a way of being in several places at the same time.

His latest play, Dhummas (Fog) is a hit and he is happy that a clutter-breaking thriller (about a doctor fighting to save his daughter from kidnappers) amidst the plethora of family drama in Gujarati theatre, has been appreciated by the audience.

When he was in school he did a few children’s plays, where he met three other “like-minded” kids, and they decided to produce their own play. “We found a financier, and at the bookstore at Surat railway station, we picked up a book, The Mystery Of The Whispering Mummy (one of the Alfred Hitchcock children’s series), and adapted it into Gujarati as Ek Do Teen. “It was quite a grand production, with seven sets. This play for children by children did very well. We produced a couple of more plays, by which time I reached college, participated very enthusiastically in inter-collegiate theatre competitions and acted in plays in several languages. Those five years were an excellent training ground for me.

“When I was in the 11th standard, I got a small part in an Indian National Theatre production, an adaptation of Cyrano de Bergerac, directed by Suresh Rajda. It was a wonderful play with music, dance, sword-fights and all, but it was a superflop that folded after six shows. The audience was not ready for it, they had not yet learnt to appreciate this kind of play. We were all shocked, but for me¸ the eight-month rehearsal and working backstage on costumes for 48 actors was a learning experience. Rajda offered me a cameo in another play, and my brief was also to step in for any other actor who was absent. He trained me to shift from one role to another in the same play and do multiple parts.  So it has become very easy for me to also step out of a character. Once the play closes, I erase everything. Some actors remember lines for years, I blank out my mind.”

Kamlesh produced his first commercial play when he was in the 12thstandard; called Vansh, it was adapted from a Marathi story, which was based on a real incident. “I got Gujarati film and stage star Rajeev and Priya Tendulkar to act in it. It was about a medical scam to cheat infertile women, by giving them pills to simulate pregnancy and then handing them stolen new born babies. This play taught me how to reach audiences with realistic plays. Vansh did not do too well, but it gave me a lot of confidence. Meanwhile, I continued to direct plays for inter-collegiate competitions, and one of my plays, Khelando, won awards too, so my mother was happy.”

What he calls his breakthrough, came with the play Amari Duniya Tamari Duniya, starring Siddharth Randeria, based on the Marathi playNatsamrat—about a great stage actor past his heyday. “I was called at the last minute, handed two sheets of paper and told to come to the grand rehearsal the following day. In the past, I had actually been given my lines in the wings, two minutes before going on stage, so I can deal with any emergency. I played the boot polishwala, who turns into a hero at the end.  In Ahmedabad, we performed at a hall that had a khau gully (street food hub) nearby, and towards the end, at every show, the waiters, cooks and cleaners used to sneak into the hall to see my performance in the last two scenes. They liked it so much, that when we went to eat after the show, nobody took money from us.”

He recalls another instance, when he was called to the theatre to see a play called Shriman v/s Shrimati and told to remember the movements because he was going with the team to Chennai the next day. “Once I was in two plays called Kautilya and Chanakya, and they had to stagger their show times so that I could perform in both on the same day.  I must say all this was great fun.”

Soon, he was producing and directing plays for the Birlas and travelling all over the country to perform at their factories. “The audiences were very raw and very real.  We did Hindi and Gujarati plays and had actors like Rohini Hattangady and Reema Lagoo, who were without any airs. They would help backstage, would put up the set if we were running late; once I found Rohini ironing costumes because the dhobi was ill. I gained tremendously from these experiences.” 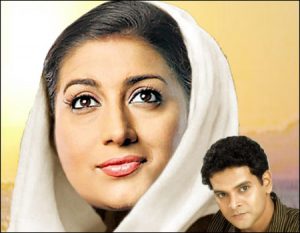 Kamlesh says he has lost count of the plays he has worked on, but the biggest hit of his career is Muktidham, starring Smriti Irani at the height of her TV stardom, as an old woman who goes to Benaras to die.  “She was a complete professional, would come an hour early for rehearsals and observe everything. She played a widow who had to wear simple white saris, so she took them from her bai  (domestic help), and gave her new saris. It was an intensely emotional play; I remember a scene when she walks towards the Ganga, which we had created with lighting effects. A man shouted in Gujarati, ‘Sister, don’t go any further, there is water, you will drown.’  I tell you, this can happen only in theatre!”

He gives credit to his “brilliantly creative” directors and set designers like Chhel-Paresh, from whom he got a sense of set and light design. “InDhummas for instance, I gave the designer the idea of creating a multi-level set, so the action moves on different locations without any blackouts.  Whenever I can, I try to take Gujarati theatre away from box sets and conventional lighting. I understood over the years of doing theatre, that things constantly change and we have to be ready for that change. I am afraid commercial plays have killed art in Gujarati theatre, that pursuit of excellence is lost. I have to work hard to be financially comfortable, but the whole creative process keeps me going, I am constantly working on scripts—there are three that are almost ready for me to direct. I love rehearsals, and one thing I do well—I tell actors this is the story, this is their part, this is how far the character goes, and they cannot cross that line. My kids Sharvi and Dhruv also act on stage on and off, but they are busy with their other careers. My wife is our monitor, without her, we couldn’t function.”

(This piece first appeared in The Hindu Friday Review on August 9, 2019)