It has been over 30 years since Sushama Deshpande started performing her celebrated solo piece, Vhay, Mi Savitribai (Yes, I’m Savitribai), about the life of social reformer Savitribai Phule which has taken her to small hamlets in India as well as international platforms.

The work of Savitribai, wife of Jotiba Phule—both pioneers of women’s education in Maharashtra, influenced her so strongly, that her subsequent work as writer, director and performer, focused on social issues—women’s lives in particular, whether it was working with tamasha dancers, sex workers from Sangli, LGBTQ activists in Pune or telling the stories of women bhakti poets from Maharashtra, the struggles of Dalit women and exploring the lives of the urban working class through the paintings of Sudhir Patwardhan.

Her work is greatly inspired by Augusto Boal, the Brazilian theatre director and writer, who founded Theatre of the Oppressed, that gave voice and expression to the underprivileged. Already working with rural women, and “searching for means to do it better,”  Sushama heard of Boal through friends, and with the help of her friend Betty Bernard (who had interacted with Sushama when working on a book on women in Indian theatre), went to Los Angeles for a three-week workshop (in 1997), to learn his techniques, and how to apply them in the community theatre that she was involved in.

“It was a very rich experience,” she recalls, “Augusto has been the greatest positive influence in my life. With him, it was just learning something all the time. If I asked him a question over dinner, he would ask me to put in the form of theatre the next day and the answer would appear. For him, everything had to be discussed through theatre. There were theatre games and exercises he devised, that taught one to think not just about theatre, but about life.”

“Except for Prakaran Pahile, all my plays centre around a cause, because I believe whatever you do has a social message, some people talk only about the artistic level of theatre, but it is a very strong medium for creating social change. I don’t expect every member of the audience to be affected, but if even one starts thinking it’s great–it is a slow process. For me there is no debate between art for art’s sake and art for social cause, but I do believe that theatre should not be typical propaganda, there should also be some aesthetic quality to it to have more of an impact.”

The former journalist admits that the current social and political climate sometimes leads to question her work. “I do get the feeling, why am I doing this? What is the use? Are people getting something out of it or not? My husband says, I have been performing the life of Savitribai Phule, who lived through tougher times, so I should have a more positive attitude.”

There is also the added incentive of seeing an immediate impact of her work. “After a show of Savitribai in Uttarakhand, a young teacher came up to me and said, she believed she was a good teacher, but now she would try to be the best; ‘That is my commitment to you,’ she said.  At another show, some young girls said that their mothers had seen the play when they were in school, and decided to educate their daughters properly.  So, somebody, somewhere, does take away something from a play like that. In villages, there is an emotional response to Savtribai, because their lives are reflected in it. When I perform in rural areas to an audience of women, I talk to them before the show. I sit on stage and do my make-up, and sometimes wear my sari there too. They relax and watch the performance and discuss their problems with me.

“I have allowed anyone to do this play, in any language… they don’t even have to take my permission, because Savitribai is not my property. Some girls are doing it in Maharashtra, there are Bengali and Gujarati productions of it, I do it in Hindi too.  For the last 25 years, I have not had to advertise this play, social organisations like the Azim Premji Foundaion, and NGOs schedule shows – there was one I did for women taxi drivers in Delhi–and audiences come through word of mouth.” 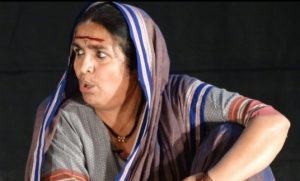 When she felt the need to do something new, she started work on her tamasha play, that was  eventually titled,  Tichya Aaichi Gostha, Arthat Maaza Athavanichi Phad (Her Mother’s Story, Or My Own Memories), the story of a tamasha dancer and her daughter who wants to stay away from that life. “I watched a lot of lavni  performances, spent time with the women.  It was a very enriching experience, though it was a long process to communicate and develop a rapport with them, but once I did, I got deep insights into their lives.

“The play (My Mother, The Gharwali, Her Maalak, His Wife) with sex workers from Sangli happened, when after doing a series of workshops, the women needed a director. When I saw what they were doing, I thought, karte hain (let’s do it).  They didn’t know what theatre was like, they did not know body language or expression, or even that they were supposed to say their lines after the other performer had finished. But the exercise of working with them was an eye-opener for me. I did another play, Hum Aur Tum Sab, which did not have a story, it was just the women talking about their lives. There was a school girl, who would just clam up on stage, and I was told to drop her. But I took her aside and she told me about the teachers who visited brothels. I used all the abuses I knew, and told her to keep those in mind and then talk. When she spoke, everyone wept.”

“I am not a formally trained theatre director, so how I arrive at a form to tell a story is not set. It can click suddenly and then everything falls into place. I have workshops with actors, we improvise scenes, and you get the form when you are deeply immersed in the process.”

She occasionally does workshops that she calls Actolab, in which she offers an “opportunity to reinvent yourself as an actor, director writer, and importantly, as a human being”, applying the processes she learnt from Augusto Boal. “Participants will learn how to sensitise themselves from the inside, mind and body. In India, there is a lot of spoon-feeding, showing students what to do. I believe, like Boal did, that they have to think for themselves and understand that every experience, every emotion, image, can have a different meaning for different people.”

It’s been a while since she has written a new play. “I have written one, but I don’t want to direct it,” she says, “After the film Ajji, I want to work with young directors and just act. It might be fun to do that for a change.”

Where The Crawdads Sing – Book Review