All four plays watched at the Prithvi Theatre Festival this year had one significant element in common, they were all about social issues that are affecting the country today—and it happened quite by chance, there was no theme assigned to the participants. Obviously theatre groups are thinking that their work has to be relevant and provocative to reach a largely apathetic audience.  As a result, the selection of plays– all original and new–this year, made for an exciting festival. 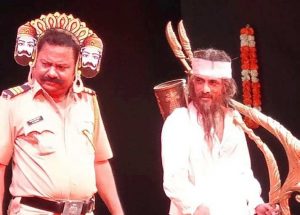 Makrand Deshpande’s Ram, performed a few days before the Supreme Court’s Ayodhya verdict, is oddly prescient. At the centre of the action is a Ram Temple, where the devotees’ noisy chants are interrupted by a vagrant (Deshpande), whose words and antics question the accepted notions of faith, and mock the hold of kitschy TV versions of the epics on our collective imagination. Unable to enter the temple, the man writes Shri Ram on a brick, with offerings of flowers and fruit, turning it into his own personal shrine for the deity he claims to be able to see. A cop (Nagesh Bhosale), summoned to placate the angry crowd looks at it and comments that “over there” it still has not been built, and here it happened in no time. While the mob is quick to resort to violence, the man’s bemused and patient listener is the policeman. In between the verbal duels between the two, is the whimsical staging of a Ramayan-Mahabharat mix, which is funny enough to break the tension of the playwright’s actual message; the last scene is absolutely stunning. It’s wonderful to watch these two seasoned actors, the talented Ansh ensemble, and read between the playwright’s lines. After the recent Pitaji Please, which gently dealt with an interreligious romance, Deshpande has again written and directed a play right out of the headlines, and given it his own individual dramatic stamp. 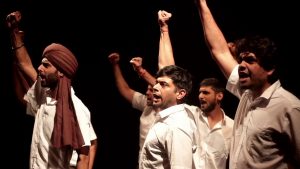 Piyush Mishra returns to one of his old plays, Gagan Damama Bajyo, which attempts to give the ideology of Bhagat Singh, and his contribution to India’s Independence movement its rightful place in history. The revolutionary was hanged by the British at the age of 23, along with Sukhdev and Rajguru, and their bodies furtively disposed of, to prevent rioting. The playwright-director, asks, through characters in the play, why only a few leaders are given credit for India’s Independence? Is it because the methods Bhagat Singh and his group adopted were against Gandhi’s principles of non violence, and also because the young freedom fighter spoke out against the Mahatma? Some of Bhagat’s Singh’s family lived in obscurity, while one of his comrades, Shiv Verma lived up to 1997, but nobody knew or cared about their sacrifices. Hindi cinema has produced half a dozen films on Shaheed Bhagat Singh—three of them in 2002— but still, he remains somewhere in the background of history. The structure of the play is simple, all the key incidents of Bhagat Singh’s (Himanshu Talreja) life duly ticked, but where Mishra excels is with his use of live music (Anadi Nagar sings beautifully), the choreography and an energetic ensemble of young actors with clear voices.  Songs like Sarfaroshi Ki Tamanna and Mera Rang De Basanti Chola never fail to connect at an emotional level. There is also the very pertinent question in the end, is this the India those young men gave up their lives for? 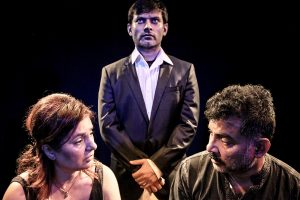 Annie Zaidi’s play that won the Hindu Award last year, is directed by Danish Husain, who also plays the lead role of Vishwas, a writer who falls afoul of a totalitarian regime. The Orwellian play is set in a dystopian future (stark sets gleaming gizmos and drab brown uniforms worn by ordinary citizens), where the state snoops on citizen’s private lives and communication devices (too few calls are considered suspicious). Vishwas and his vaguely disgruntled wife Dina (Kitu Gidwani) find out just how much trouble they are in, when they are visited by a stiff-backed representative of the state, and the writer’s former schoolmate, Satyajeet (Abhishek Saha), because Vishwas is suspected of writing “outside the grid,” and possibly harbouring seditious comrades, who distribute banned literature. Instances of extra-constitutional censoring of films, books, plays and even social media posts have been reported over the last few years with increasing, and alarming frequency, and the play warns us about what could happen if we relinquish our precious freedom without a fight. 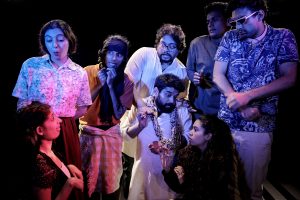 The long title also encapsulates the plot of Faezeh Jalall’s play—a boisterous farce that uses stereotypes to satirize society’s attitudes towards people who belong to other religions. The Cosmopolitan Cooperative Housing Society (anything but!) comprises four squabbling families—Hindu, Muslim, Christian, Parsi; an unmarried Sikh couple also turns up to add more comedy to the already raucous proceedings. The narrator is a domestic help, Kalpana (a brilliant Parna Pethe), who commutes in a crowded local from Nalasopara to work in all four homes, and her employers don’t even bother to remember her name. A bone is spotted on his balcony by the pernickety Jai Jain (Karan Desai), who kicks up a fuss because they are vegetarians. He instructs the maid to throw it into the balcony of the D’Souzas, mainly because he disapproves of the lady of the house being a divorcee. From there the bone is dropped into the balconies of the Sheikhs and then two Parsi women who own a dog. The screaming and shouting leads to the unfortunate Chairman of the society Dr Aspi (Junaid Khan) and his factotum called Friday (Sunny Abraham) summoning a special general body meeting to solve the mystery of the bone. The large cast gets into the spirit of things right at the start (even though the double-level set looked rather precarious), chivvied along by Kalpana’s rap singing. The play is very funny, and, like those jokes about various communities (that includes sexual minorities) that zip around Whatsapp groups, the humour is meant to make the audiences slightly uncomfortable, as they are forced to examine their own prejudices. Jalali’s recent plays like 07/07/07, Shikhandi and A Farming Story have also picked up various causes, all of them had a different and distinct style that suits the material at hand. Bone Of Contention has the lightest tone of them all, yet holds up a mirror to society most effectively.