Vijay Kenkre grew up in a home, surrounded by theatre as his parents Damu and Lalita Kenkre and aunt Sudha Karmarkar were stalwarts of Marathi theatre. “Which is why,” he says, “I decided I would not do theatre. I wanted to be a chartered accountant, and I also played cricket. I got into theatre by accident. I was sitting outside my college, when I was called in to read a play. They said, ‘he is good, take him’. Some of the inter-collegiate plays I did, won awards. But when I came into professional theatre, six of my plays flopped, till I did Karti Premat Padli, an adaptation of PG Wodehouse’s The Small Bachelor.”

Since that inadvertent induction into theatre, Kenkre may have become a prolific and successful, director, actor and occasional writer, but he does not even have a biodata, that is a prerequisite for an award, like the one conferred by the Sangeet Natak Akademi. “Because,” he explains, “I am not going to send my own biodata! Who does that?”

Kenkre’s last few plays—like A Perfect Murder and Maharathi— have been thrillers, and before that he directed a dozen comedies. “In between if I get a good play I would do it. But I still haven’t done a classic whodunit and I want to do one; I plan on directing plays based on Agatha Christie’s Murder Is Announced and Unexpected Guest. I also want to do Night Watch (by Lucille Fletcher) in Hindi. I think thrillers are becoming popular on the Marathi stage, because the audience has started watching web series, and is now interested in a genre they were not so keen on before, so there were hardly any thrillers being done. With A Perfect Murder, I found that younger people and non-Maharashtrians were coming to see it, because they had heard of, or seen, the Hitchcock film. At the same time, they are exposed to too much comedy on TV and the web, so they no longer want to see regular slapstick comedy plays.  Even the mainstream audience wants something different.

“Right now,” he continues, “there is a French playwright Florian Zeller, whose style I find very interesting—and I want to all five of his plays, Father, Mother, Son, Truth and Lie.  These plays were suggested to me by Paresh Rawal. I know Naseerbhai (Shah) has done Father and Truth, but I want to do Truth and Lie together, in Marathi.  I don’t know how Naseerbhai has done Truth, but for me, it is a humorous play, almost like a farce, though not a conventional one. What happens in these plays—like the woman spotting her married male friend kissing another woman– can happen to anyone, at any time, it’s not just about man-woman relationships or extra-marital affairs. I remember once, lying to my wife (actress Mangal) that I was on my way home, when I was sitting with a friend in a restaurant. He asked for my phone, and as a reflex action I gave it to him and he revealed that I was with him.”

About his decision to do adaptations, he says that there is a shortage of playwrights in Marathi theatre. “They write, but more for television than for theatre. On TV an episode lasts for twenty minutes and the tracks keeps changing. To write for theatre you need substance; because of TV writing that is missing. Another thing, the earlier generation of playwrights wrote such memorable characters that we still remember their names. That is no longer the case. There is talent, I don’t deny that, but over the years, there has been a major shift—the younger mainstream directors are more into visuals than excellent literature. Theatre may be about performance, but literature is also important, that’s why revivals of old classics do so well, but then, the audience is fifty plus. What happens after ten-fifteen years? What next? We need somebody providing good content. There are good playwrights, but they are not prolific or consistent. These days, I hear there are directors who start without even a complete script, they just have an idea, and improvise, so theatre, from being an actor’s medium, has become a director’s medium.”

He also believes that the lack of auditoriums in Mumbai has killed the experimental play.  “I don’t mean content wise—that is still there—but in terms of sensibility. In experimental theatre, they should have a licence to fail. But they are forced to perform at proscenium theatres and get no concessions in rentals or newspaper ad rates, so they have to either hunt for new venues, or stage their plays at conventional venues, that results in the content getting hampered. There is very little out-of-the-box work happening. I was judging a competition of experimental plays in Mumbai and out forty entries, thirty-five were mini commercial plays. And even they can’t get actors. If you do one good role in an inter-collegiate competition play, you right away get a lead role in a TV serial. It is equally true that careers on TV are short lived; after the serial ends, the actor vanishes. When we were younger, there were hardly any training institutes, now there is awareness that this field also requires training. But most people come out of these institutes and straight into television or film. Earlier we used to do sixty shows a month of a play, now we can have shows only on weekends. It’s a vicious circle, because there are shows only on weekends, they needs stars. To become stars, the actors have to go to television, which is so demanding, that they can’t do theatre continuously or comfortably. I understand there are economic compulsions and also the distances they have to travel for rehearsals. But if you go to a producer with an idea, the first thing they ask is ‘who’s in it’?” 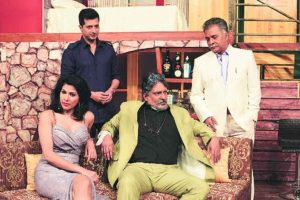 Kenkre did Othello and several other Shakespearean plays early in his career, also plays by Tom Stoppard, Luigi Piradello, Vijay Tendulkar, and wanted to continue on that track. “Then I realized, when I entered mainstream theatre, that somebody is putting in money with the intention of recovering it. There have to be compromises and the need to do popular plays, so that the producer makes money and produces another play.  I did direct some offbeat plays like Dhol Tashe, Music System and Raaste by GP Deshpande, and acted in Satyadev Dubey’s Inshallah, but my concentration was on mainstream theatre, which I didn’t really want to do. When I sit back and think about it, I wish I could have done more experimental and parallel plays.”

He does get to do his kind of work when he directs productions with university students in Mumbai and Pune or with the Goa Repertory, where he gets to do plays in his mother tongue, Konkani. “With the students, I do plays like Medea, Viraasat (Hindi version of Marathi masterpiece Wada Chirebandi), Cherry Orchard, Hiroshima. A positive trend I see is the increase in the number of female playwrights. After Sai Paranjpye, there are now a few women like Irawati Karnik, Manaswini Lata Ravindra, Kalyani Pathare, Shweta Pendse. If they keep doing original work, they will make a difference.”

After directing eighty-five plays, that he admits he does not particularly like, “One thing I regret that I was not trained, and the other that I could not do a really great political play. I did Dhol Tashe (a satire about religious practices), which provoked people, but now GP Deshpande is no longer there to write one.”

(This piece first appeared in The Hindu dated November 1, 2019)